Andrew Manning presented “Michelle Arnold Paine’s Spiritual Nudes” at a Gordon College Symposium event on the Tradition of the Nude in Art in Spring of 2014. 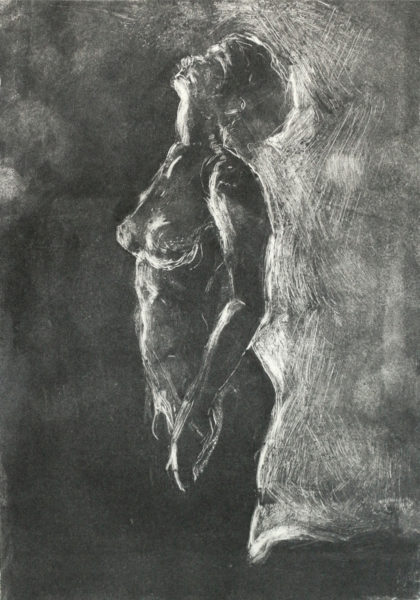 Michelle Arnold Paine’s work occupies an ‘in between’ space in a number of ways, mediating between the spiritual and the physical, the ancient and the modern, the universal and the particular, the abstract and the representational. Her work draws threads together, juxtaposes them, asks questions, and all this she undertakes as a means to discovering true reality —of what is. Her works include architectural paintings of cathedral interiors, stunning watercolors of nudes, and holy scenes. Regardless of subject, Paine never settles for outward appearances, but plunges deep into the world of spirit. Her understanding of spirit, far from dismissing the material realm rather recognizes body as the dwelling place of spirit. Hence physicality and a sense of place consistently inform her visual exploration.

Paine’s three pieces, Upwards, Gesture, and Kneeling Twist, displayed side by side in the Gallery at Barrington Center for the Arts at Gordon College touch three spiritual postures of the human soul. In Upwards Paine places the figure close to the center of the composition with head tilted upward and arms relaxed at her sides. The background is left unspecific, perhaps to avoid a sense of place and emphasize the universality of the print. Light and shade work together to create a glimmering sense of atmosphere of which the figure is simply a part, flowing in and out of shadow with no lines to cut her out of the space. Themes surrounding the traditional genre of Annunciation art also spring to mind.

The body itself feels solid, yet at the same time light. Composing vertically and directing the gaze of the woman upward create the sense that the spirit, if not also the body of the woman are straining upward, ready to leave the solid foundation of the earth. The fact that the base of the figure is not visible also lends itself to this illusion. Instead the legs flow into an area of darkness before they reach the edge of the composition.

The nakedness of the female in this piece, and indeed, in all three pieces, is not arbitrary. On the contrary, the nudeness of the human form here is grounded in theology – in the belief that the human form is both a reflection and a working out of the divine. In Upwards, as in the other two pieces, Paine suggests a state of soul through physicality. Upwards evinces a peaceful yearning, a confident desire, a faith-filled seeking. This is accompanied by an open receptivity to something beyond oneself, knowing that one has nothing to offer in return. 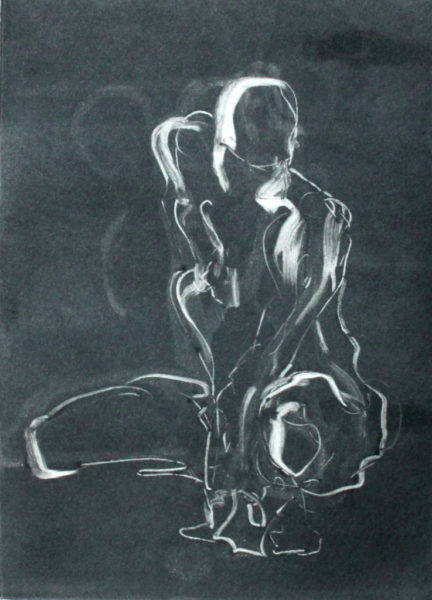 Gesture: Taut, the second in the sequence of these three pieces is a playful, but powerful piece. In it, Paine captures a state of the soul that is watchful, brooding, waiting, silent, and expectant. There is a forceful dynamism in this piece wherein the viewer senses the awesome potential energy of the form, an energy that has not yet been released.

This piece stirs up curiosity and desire, prodding, beguiling, and seducing the viewer as with a magnetic pull, all the while resisting pat explanations or easy definition. Line is more indicative of this piece than of the other two, and the beautiful grace and expressiveness of the line-work serves to suggest rather than to pinpoint the parts of the figure.

In the third work, Kneeling Twist, the treatment of the figure and the formal qualities of the work are raw and visceral, hinting at a corresponding rawness of spirit. The contorted figure thrusts into the space dramatically, almost violently, and every sinew of the body is tense and strained. If this print were a musical piece it would be very loud. The work as a whole seems to scream at the viewer, conveying a strong sense of dramatic emotion, though it is hard to pinpoint the exact emotion. At the very least it may be safely identified as the experience of pain, whether in anguish, fear, disillusionment, anger, grief, or despair. Strong contrast, a bold composition, and emphatic use of line will seize the attention of anyone giving it a casual glance.

In these works, Paine reveals herself trained in the spiritual practice of empathy – of entering into (through the imagination) the situation of another being. Paine makes this explicit in her artist statement that describes her representations of Mary, the mother of Jesus. She explains that in Mary, she sees the same spiritual struggles she finds in herself, and these struggles inhabit and inform the representation of Mary on the canvas. Through the medium of paint and with the aid of the imagination, she is able to step into Mary’s skin and see things from her position.

Each of these works is both inside and outside space and time, conveying a sense both of the universal and of the particular. This universality makes them easy for viewers identify with and hence to engage the works on a deeper level. Her figures, far from the classical ideal of beauty, retain the brokenness of humanity, a brokenness that is both spiritual and physical. At the same time, Paine preserves their dignity and value, arguing that man’s design is not wholly evil. In each of these figures the signs of life and death are evident, like permanent and deep marks that cannot be wiped away. Darkness and light, angel and a beast, breath of God and the dust of the earth – this is the reality of man’s situation and Paine, in these three small and seemingly insignificant works has given her viewers a vivid glimpse of this reality.

Intruding Upon the Timeless Includes a Variety of Printmaking Artists

Advent with Mary: Exhibit at University of Dayton