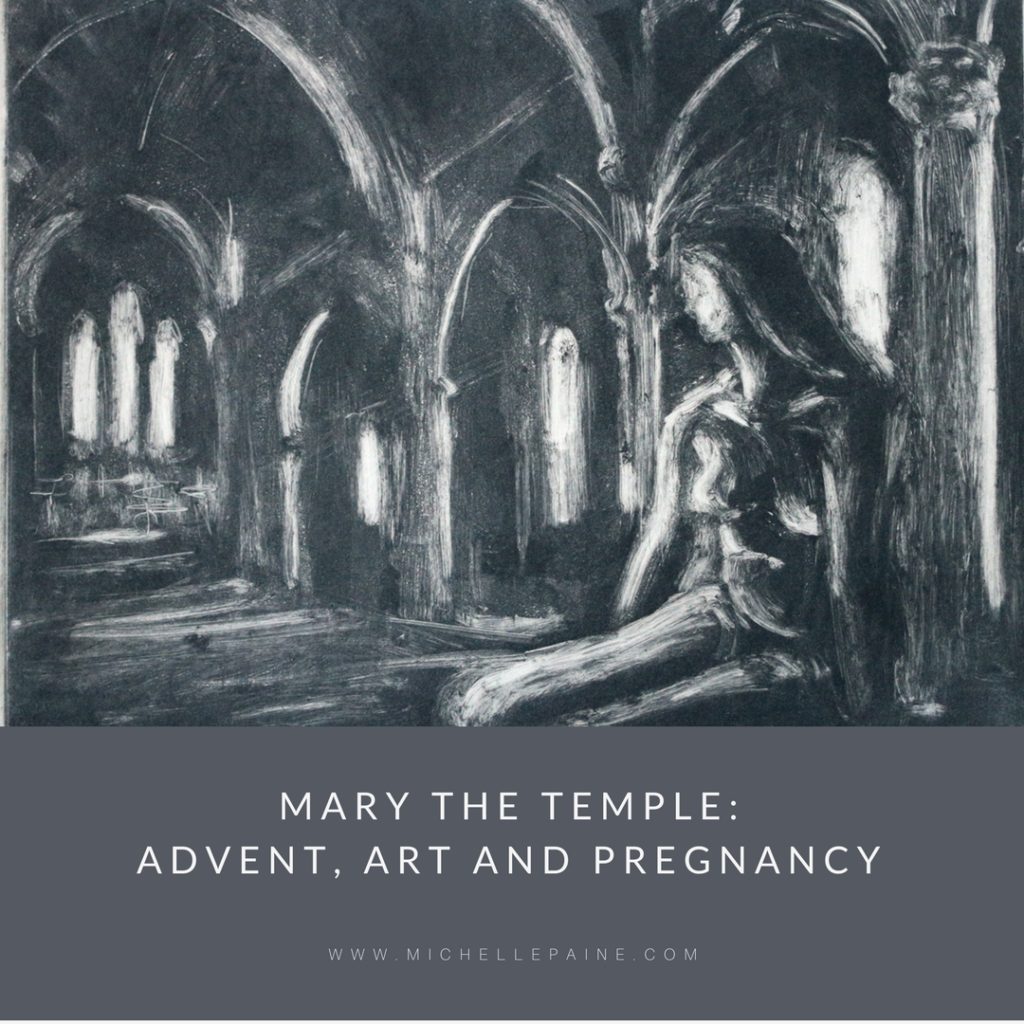 Advent is a natural time to reflect on Marian art. This monoprint on paper (currently on exhibit at the University of Dayton, Ohio), is meant to be an exploration of the line “Mary the temple” from a medieval hymn I found a number of years ago. Through art I have been exploring the metaphors from the hymn line by line for nearly a decade now. Through an encounter with sacred architecture and Marian art during my study abroad many years ago, I came to have a new understanding of the Virgin Mary.

What is a monoprint? A “hand-pulled print” refers to the traditional printmaking process where a plate is created that can then be rolled through a press multiple times to create multiple images. A monoprint uses the same traditional process (an image on a plate, rolled through a press) but it only has one iteration. Unlike an etching or engraving or woodcut, where the image remains impressed on the plate and can be inked and run again, a monoprint is a completely unique image. It is more closely related to painting than other forms of printmaking.

Mary the perfect image of God

Just as our bodies are “Temples of the Holy Spirit” (1 Corinthians 6:19), so was Mary’s. Mary’s body became a Temple in a literal way when she became pregnant with Jesus. The Lord came and dwelt there in the Temple, as He had in the Israelite’s Tabernacle in the desert.

Genesis tells us that man and woman were created in the image of God. Because of the sin of Adam and Eve we experience that image as cloudy, like a dusty, spotted antique mirror, but Mary shows us the image of God spotless and new: what God intended before the Fall. Mary is the humanity in the image of God as it was intended to be.  Without sin, she manifests the fullness of redemption, without sin and without shame. 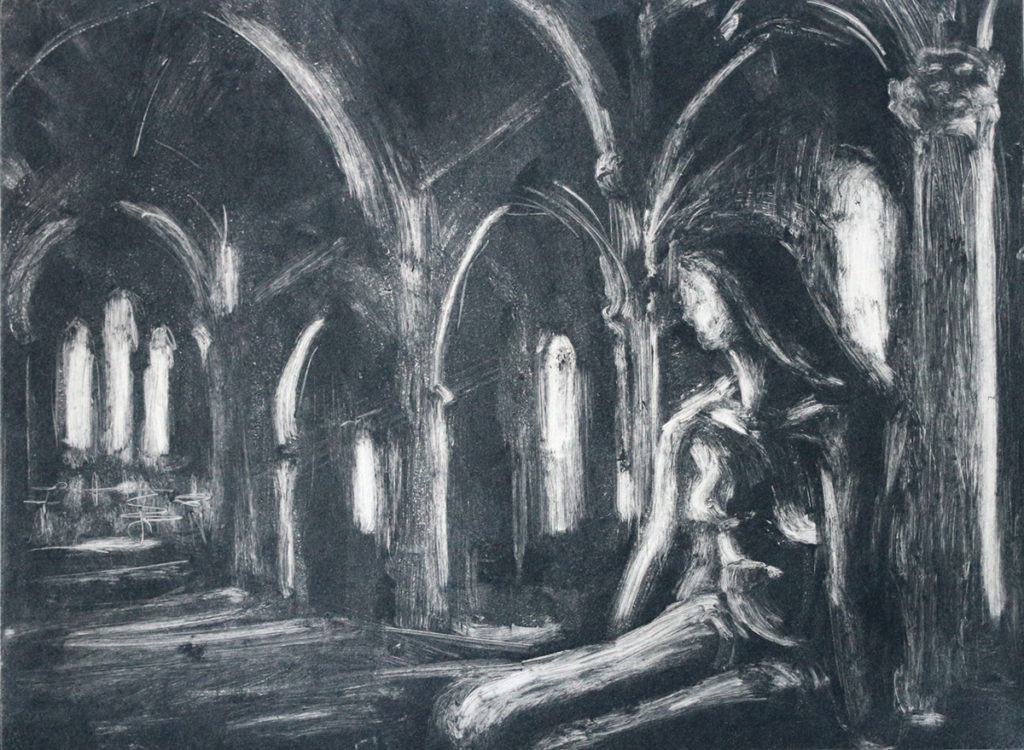 “Temple” monoprint on paper, on exhibit at The Marian Research Library at the University of Dayton until January 5, 2018. ©Michelle Arnold Paine 2019. Click to Purchase

The Advent season is a period of waiting for redemption, in which we reflect on the meaning of the Incarnation. The Incarnation, when God became embodied in the person of Jesus bestows dignity upon these earthly bodies of ours, giving hope that they are more than just a shell.

Mary’s Advent waiting was her literal time of “expecting”: it was her pregnancy, the time of waiting for the birth of her son. To add another layer to the theme of Mary and Advent and waiting, I created these monoprints during my own pregnancies, waiting for the literal birth of a child but also the metaphorical birth of more mature artworks.

During my pregnancies several years ago I wanted to keep making art to maintain my creative momentum, but several things kept me from continuing to work on larger oil paintings. For one thing, standing to paint was harder and harder for me as belly grew.  I also wanted to keep my distance from any solvents or potentially toxic pigments that can be found in oil painting.

I stepped back from oil painting and found my solution in creating these small monoprints. These prints are small – only 6″ x 8″, so they were easily created while sitting at my drafting table. They were created with water-based Akua inks, so no solvents were necessary in the cleanup, unlike traditional oil-based printing inks.

Even before becoming pregnant, my work on oil paintings inspired by the above hymn had come to a standstill; I seemed to be spinning my wheels as I began new paintings. When that happens I usually resolve the block by retreating from color into black-and-white, either by drawing, or, in this case, printmaking. I have also learned that working at a small-scale can help me quickly solve problems of composition and value that would take much longer at a larger scale.

This series of monoprints, while a series of artworks in their own right, are also meant to serve as “sketches” for larger paintings which I am continuing to pursue, albeit slowly and sporadically. I am so pleased that I am finally able to exhibit the prints together.

The monoprints are available for purchase in my online store!

“Temple” monoprint on paper, on exhibit at The Marian Research Library at the University of Dayton until January 5, 2018. ©Michelle Arnold Paine 2017 michellepaine.com

Intruding Upon the Timeless Includes a Variety of Printmaking Artists

Advent with Mary: Exhibit at University of Dayton