“Reflections: On the Edge” A Modern Annunciation Painting 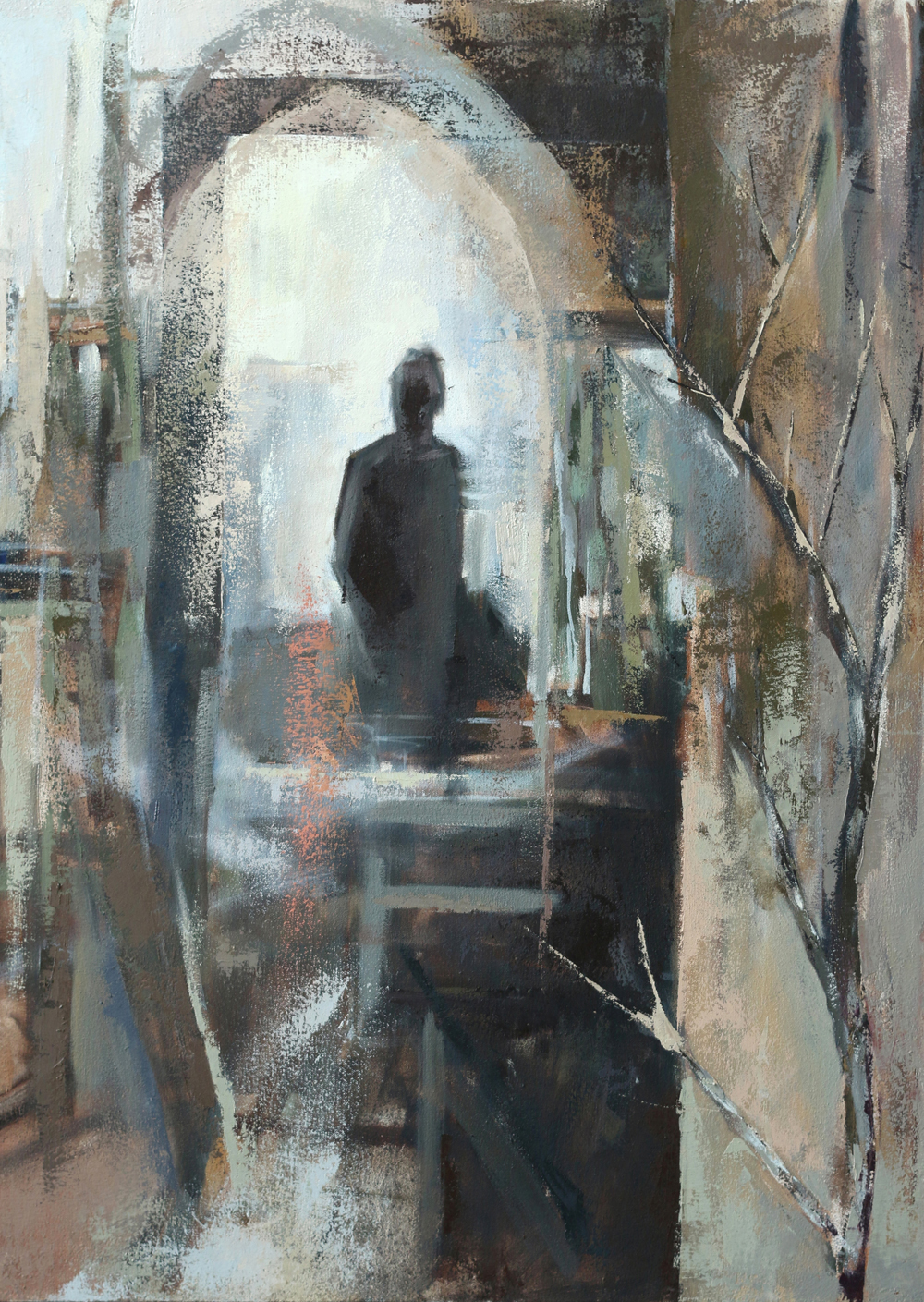 This painting “Reflections: On the Edge”, featured on the exhibit postcard for “Divine Dimensions”, generated a lot of questions and discussion at the opening reception for the exhibit.  The concept began as explorations for a modern Annunciation painting, and I am going to discuss the process and concepts here.

When I was in graduate school I worked on the historical and philosophical concepts of painting as mirror or as window, both in my writing and in the studio.   “Realist” drawing and painting is the struggle to represent the three-dimensional world on a two-dimensional surface, and both mirrors and windows participate in the mind-game of two-dimensional vs. three-dimensional. One of the most famous paintings which plays with these ideas is “Las Meninas” by Diego Velazquez. It took many years for the concepts and drawings I explored in my first year of grad school to evolve into paintings.

The origin of the painting “Reflections: On the Edge”  is this tiny mixed media drawing. It is quite small, about 4″ x 6″ and is from that studio series from my first year in the MFA program at UNH. I purchased mirrors from rummage sales and set them up around the studio, also using the large studio windows as a prop. In these studies, the paper has now become a zone of contact by which artist and viewer are brought into dialogue.

The figure in the mirror is attentive, ready, waiting, poised in the act of creating. Her world is not limited to the objects before her – the mirror, the window, the branch. Within them, through them, she sees more: she sees deeper into a physical world than would be considered possible at first glance The play of light on the mirror reveals a view of herself from behind: a vision of her small world she cannot see with her eyes alone. The small room in which she works suddenly recedes into deep space. 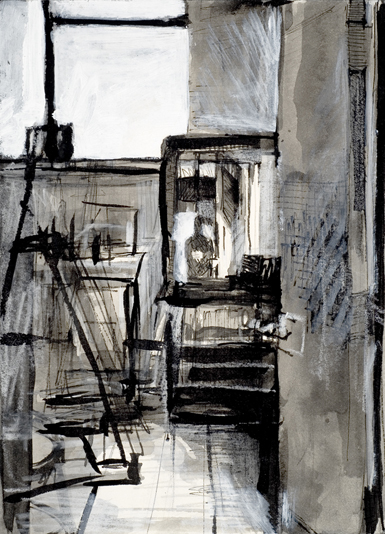 Looking at this photo of  an early stage of “Reflections: On the Edge” in process, we can see that the composition closely  follows the mixed media drawing. 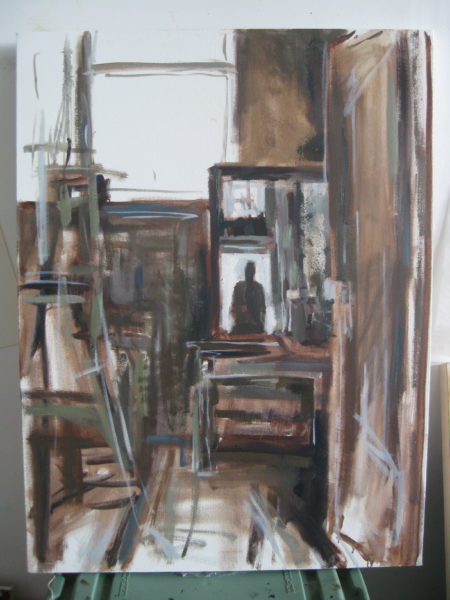 “On the Edge: Reflections” in its early stages of progress. ©Michelle Arnold Paine

From this point the composition evolved to give more emphasis to the figure and add some of the elements included in this painting, “Gate of Heaven” (“Mary the Gate, Christ the Heavenly Way”, which also came from a similar starting point in my studio. 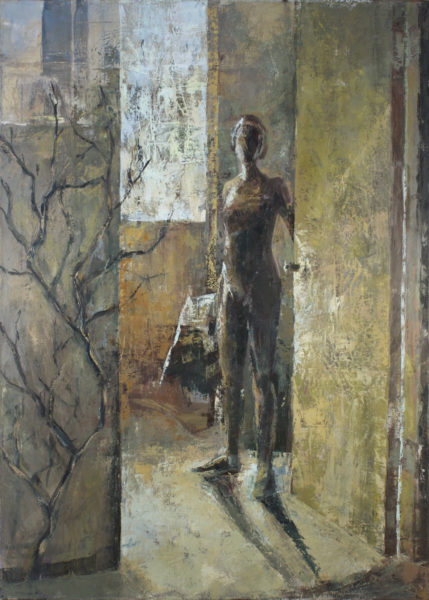 Painting is always an interpretation, always an illusion, but an illusion which reveals. How to describe metaphorically this relationship between art and reality has been the subject of philosophical debate for centuries: Does the image on the canvas mirror the world, or is it a window through which the observer is given access to another view on reality?

Painting as Window: Looking through

The other main metaphor used in history for how painting relates to visual reality is that of a window. Eastern Christianity saw icon painting as a “window into heaven”. The icon painting, just as much as any of the church’s sacraments, was a place where heaven and earth converged. Meditating on the painting actually brought one into communication with the spiritual realm – or rather — the realm of true reality.

In the modern world, it was Leon Battista Alberti who first gave voice to the concept of painting as a window. In his treatise On Painting in 1435 he states: “First of all on the surface which I am going to paint, I draw a rectangle of whatever size I want which I regard as an open window through which the subject to be painted is seen.” This concept of window, combined with the advent of linear perspective, brings the contemplation of painting into a more subjective realm than that of the world of icons, for the perspective from the “window” is completely dependent upon location and mood of the artist/viewer. 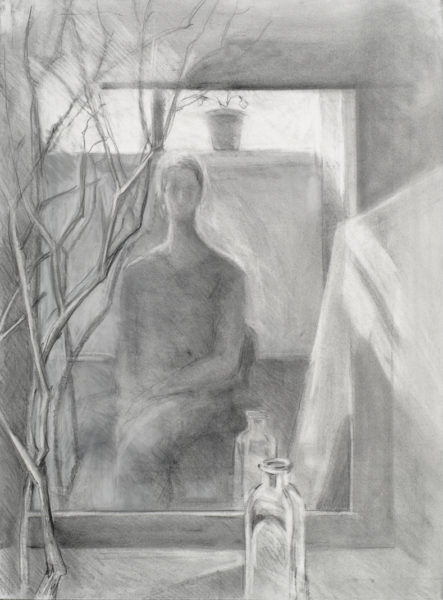 Through A Glass Darkly 2, Graphite on Paper, from a series of drawings exploring window and mirror in graduate school. ©Michelle Arnold Paine. Collection of Gordon College.

A window, when taken as an object, is the place of convergence between the flat two-dimensional wall and the three-dimensional world on the other side. Painting is an illusion which brings to the forefront this play between two-dimensional and three-dimensional. We use windows so that our existence is not limited by our immediate surroundings. They give us access to the world outside, a world of possibilities which extends to the horizon. Painting, too, holds this purpose, giving access to other worlds – spiritual, earthly and temporal.

In these self-portraits, I, the artist, invite the viewer to look through a window of the picture plane into the space of my studio by including the mirror’s frame and setting on the table. The painting serves as a window through the wall and into a space which would not otherwise be visible.

The waiting, creative pose of the woman and the light “overshadowing” the figure from the window, both allude to the representation of another story, another woman who watched attentively, and met unexpected Truth in the presence of the mundane. The title  “Reflections: On the Edge” alludes to this crossing over between heaven and earth that occurred in the Incarnation. I began exploring imagery of the Virgin Mary years ago when I happened upon a medieval hymn with the line, “Mary the Mirror, Christ the Vision Blest”. It related to the painterly themes of mirror and window which continue to fascinate me.

The images of  the open door, the window, the light all point to dwelling on the edge between finite and infinite space the way Mary did. It is not only a metaphor for our earthly journey, but a metaphor for the process of painting itself. Painting, drawing, writing – any creative act – creates a tension between openness and control, faith and work, creation and discovery, spirit and matter, body and soul.

This painting will be on exhibit  at 20North Gallery, 18 N. St. Clair Street Toledo until June 29. I’ll be at the gallery during the May and June Art Loops (Thursday May 16 and Thursday June 20) if you want to come and ask questions! 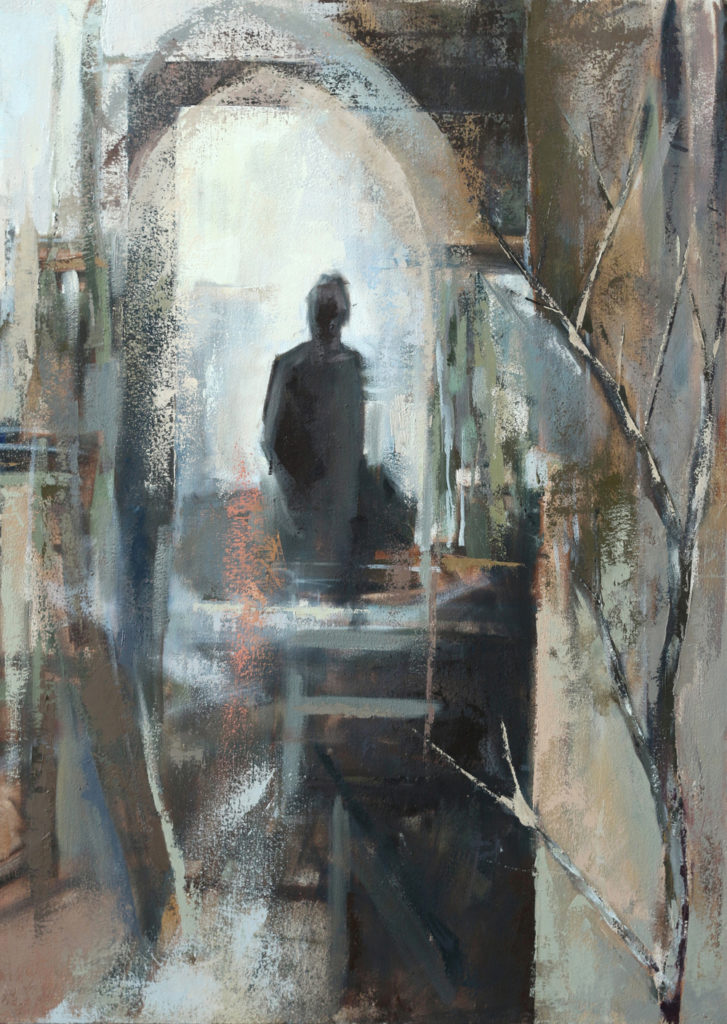