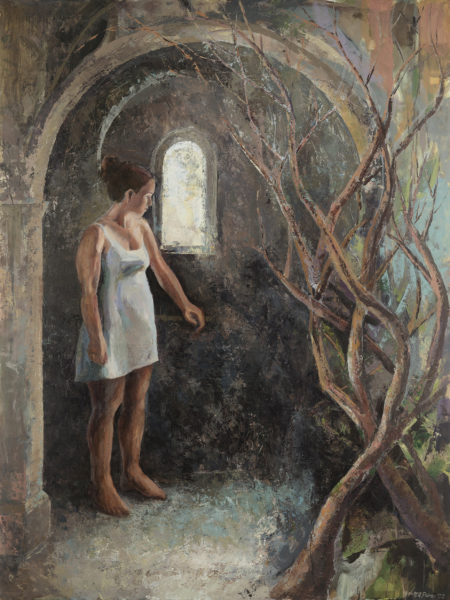 My new painting “Closed Door to Paradise” explores the relationship between Eve and Mary. The painting shows the door to heaven, to Paradise, closed after Adam and Eve took of the forbidden fruit of the tree of the Knowledge of Good and Evil. Eve’s doubt led to the closing of the door to Paradise. God forced them to flee the garden afterwards. They left the Garden of Eden and the harmony of life there and humankind has suffered from sin ever since.

“He expelled the man, stationing the cherubim and the fiery revolving sword wast of the garden of Eden, to guard the way to the tree of life. ” Genesis 3:24

This painting shows Eve at the closed door. She’s not in the agony of grief, as in Masaccio’s fresco from Florence. In my painting, she shows resigned acceptance and sadness at this door that closed behind her. The door which SHE closed behind her, by her choice, succumbing to temptation and eating the ripe forbidden fruit of the tree in the Garden in the Eden. We see Eve, the door to paradise closed behind her as a result of her disobedience.

Mary as “The New Eve”: The Door Opened

This painting serves as a counterpoint to the imagery of Mary, often referred to as “the new Eve.” I’ve explored in a number of images both in paintings and monotypes,  the image of a woman silhouetted in the open door. 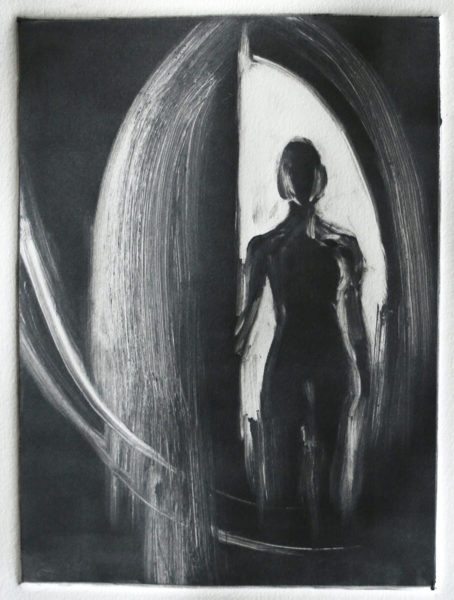 These images represent Mary as the open door to redemption and heaven.  In the Akathis Hymn of the early church there are lines, “Hail, O you through whom paradise was opened!” and “Hail, O Gate of the Sublime Mystery” which illustrate this Marian concept. Mary’s obedience reversed the choice Eve had made, opening again the way to heaven through her welcome of the Holy Spirit and God’s plan for her. Genesis implies the “closed door”  by the fact that Adam and Eve had to leave the garden.

St. Justin Martyr and other early Christian theologians explored this contrast between Mary and Eve. Mary inherits human nature from Adam and Eve, but through her womb will come an inheritance of redemption for all the world. Mary is the new Eve, the woman who reverses the curse placed on Eve after the Fall. But her curse is also her salvation, for the child she bears will be the world’s redeemer. All men and women will be saved by the fruit of her womb. She is the daughter of Adam who bears his redeemer. These monotypes from several years ago explore these images of the open door. s one example of imagery of Mary as the open door, again from the Akathis Hymn.

Eve, from Drawing to Painting

I did not intend to explore the closed door, but sometimes circumstances dictate subject matter. Since the light from closed doors is not usually as dramatic as that from open doors, I was not initially interested in that theme. However,  as my model and I were exploring options in my basement studio, we hit upon this post using the light from the small window of the door.  I began this painting with a drawing in walnut ink. In a previous post I wrote about making this walnut ink drawing . 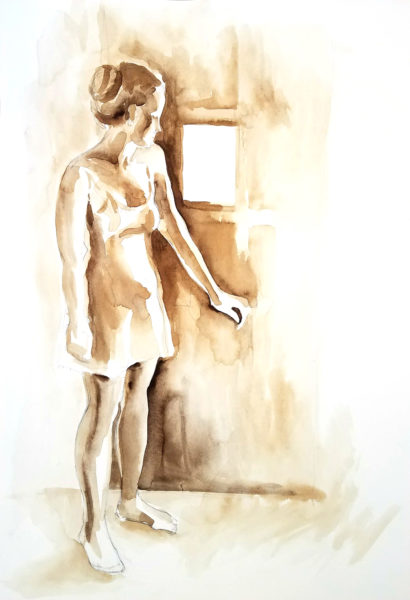 Initially I wanted to show a glimpse of the landscape from “Paradise” beyond the closed door, but discovered it is difficult to represent both closed and open at the same time! 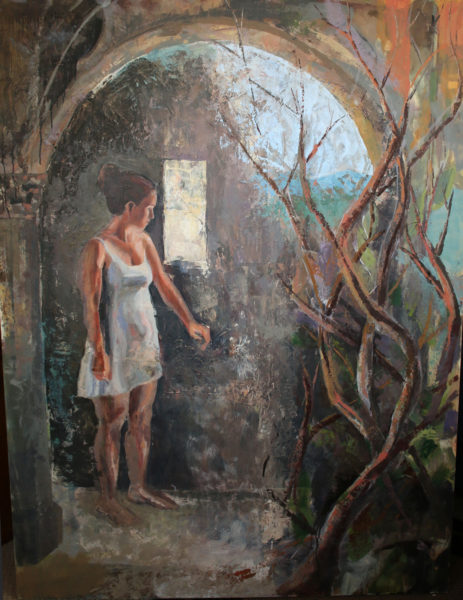 As a result, the composition split down the middle and was not working well. I realized that I was trying to cram too many ideas into one painting. Instead I determined to keep it simple and leaned into the light and concept of the closed door.

I am pleased to be able to have this painting about Eve as a visual counterpoint to the paintings about Mary. The contrast between the two is frequently referenced in the early church. This painting serves as a reminder as to why the Incarnation was necessary, and what we are waiting for in this period of Advent.

Now on view at HeART Gallery, Toledo. Visit and see the show at www.michellepaine.com/picturing-mary