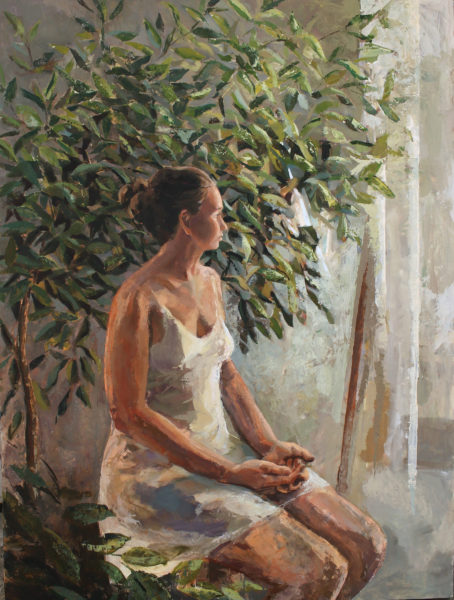 The prophecy of the Stump of Jesse

This piece “A Shoot Shall Spring Forth”  represents Mary and the stump of Jesse in the book of Isaiah. This prophecy in the Hebrew Bible foretells the coming Messiah.  The woman has open hands, waiting for new life. The woman sitting before me modeling for this painting had also been waiting for new life. For three years she and her husband had been struggling with infertility, wanting to start a family. She represents Mary, whose family has waited centuries now for a Messiah. How long, O Lord?

Before I finished painting this painting, my model and her husband became pregnant!

Then for a time the painting sat gathering dust. How to finish it if the model’s body had changed and even the tree I was painting had died? I, too, would have to believe and move forward. The process of painting itself became an image, a reflection, of God fulfilling promises.

The Bible makes many references to trees. Straight away in Genesis we read about the Tree of Life and the Tree of the knowledge of Good and Evil. Isaiah prophesies of a virgin birth from the house of David in Isaiah 11:1: “But a shoot shall spring up from the stump of Jesse, and a Branch from his roots will bear fruit.” Later, when we arrive in the New Testament Jesus says “I am the vine and you are the branches” in John 15.

“A shoot shall spring up from the stump of Jesse, and a Branch from his roots will bear fruit.”

The narrative thread of a tree continues throughout the entire Bible.  The tree grows in Genesis, but by the time we get to Isaiah it has been cut down and only a stump remains. Foreign powers had conquered the kingdoms of Israel and Judah and the people of Israel continually strayed from following Mosaic law. However, the prophets encouraged them to retain hope that from the roots a shoot, a small branch will grow again and bear fruit.  The image references the words of the prophet Ezekiel, “I the Lord … have dried up the green tree, and have made the dry tree to flourish” (17:24). I have referenced this dried up tree in  other paintings in my Mary series. Finally, of course, towards the end of the Gospel narratives, we come to the tree of the cross.

The Tree of the Cross

Contemporary Christianity does not often connect all these tree images, but Christians in the Middle Ages saw a relationship between these Biblical stories. The Legend of the True Cross, tells the story of the wood of the cross. The Legend was  most famously written down by Jacopo da Voragine in The Golden Legend of the 13th century. You can find a more detailed discussion of the Legend and the famous PIero della Francesca frescoes, in the book “Putting Art (Back) in its Place” by John Skillen.

That thread of hope must carry us through most of the Bible, through to the very end of the life of Jesus, who is then crucified on a dead tree. Is it actually the same tree which was planted by Adam’s son from a seed from the garden of Eden, as depicted in della Francesca’s frescoes? Whether or not there is factual basis for that claim, the meaning is clear: the sin of Adam continued through to the time of Christ. It is Sin which caused the death of Christ and raised him on the tree of the cross.

Where is that small seed of hope, the shoot that springs forth, the branch that bears fruit? We don’t see it until the Resurrection and all that follows.

Mary and the Tree

Christians of the Eastern Byzantine tradition saw that thread of hope amplified through Mary and the Annunciation. The Akathis hymn, a traditional hymn of the Eastern church, says:

Hail, O Tendril whose Bud shall not wilt!
Hail, O Soil whose Fruit shall not perish!
Hail O Tender of mankind’s loving Tender!
Hail, O Gardener of the Gardener of Life

Hail, Fruitful Tree from whom believers feed!
Hail, Shady Glen where many are sheltered!

Although medieval and Renaissance artists often depict Mary within an enclosed garden in  (to represent her virginity), she is not often pictured with a tree. (Please send examples if you find them!). I chose to include a living tree, the new life and branches which come when Christ comes into the world. Through Mary’s “May it be to me as you have said,” through her YES – we are redeemed. The shriveled tree of humanity bears fruit again and through Christ is able to blossom and love.

“Blessed is she who believed that the promises of Go would be fulfilled” (Luke 1:45). She sees in her heart that there is still life under the surface. Deep in the ground is the sprout of new life that can only be nourished by prayer.