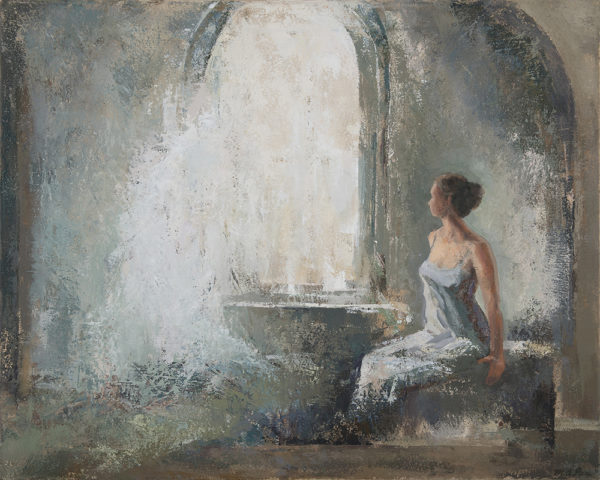 “Mary the Dawn” represents the the Annunciation, the moment of the Incarnation when Mary welcomed Christ into our world. The title references the first line of a medieval hymn “Mary the Dawn, Christ the perfect day”. The “dawn” spoken of in the poem signals that Mary was sign pointing the way to Christ. The contemplative moment of decision becomes a window into an exploration of encounters  with the divine. It is both a representation and a metaphor for a woman’s journey in the studio, in faith, and in motherhood.

The painting is now in the collection of Gordon College, part of an exhibition project “To Be Continued: An Artistic Dialogue”. This exhibit will accompany Bruce Herman’s “Ordinary Saints” exhibit. The college commissioned several of Bruce’s former students to create work for the permanent collection as tribute to his contributions to the college as founder of the Art Department.

This is the second version of this first line of the medieval hymn. The first version remains one of my most popular prints, and I wanted to continue to explore the topic with more mystery. This painting is more obviously an Annunciation. Bruce and I had several conversations about Mary during the time I was working for the Gordon-in-Italy program. We have both subsequently explored Mary as a subject over the years.

The light invites a response.

The light which pours in the window has a substance, a physicality, to it. The woman invites its presence; she is attentive and listening but not fully aware of all the outcomes. In this contemplative moment of decision she can either accept or reject the invitation.

When I went to study art history in Italy while in college, I worked hard to understand the Renaissance and medieval images. Having studied the Bible aided my understanding of these mostly religious artworks. The beautiful and profound images were detached from my 20th century life. They belonged to a time and place far from my own.

While working for Gordon-in-Orvieto for three years I immersed myself in studying the innovations of Renaissance painters who brought a contemporary twist to the ancient stories to speak to their own time. Through my own spiritual encounter with Mary and the Catholic Church I began to desire to enter the dialogue, the sacra conversazione, as well. I desired to become a painter, not only an interpreter, of these narratives.

The physical presence of the light/paint exists not only in the narrative of the past, but also in the present, in this painting here before us. Layers of paint on a canvas begin to tell a story, begin to make visible an invisible truth which remains invisible despite our efforts.

The light pouring in indicates the dawn of a new age of redemption and forgiveness. Mary’s yes signals the reversal of Eve’s disobedience. Her acceptance issues in the New Covenant, whose full radiance will only become clear later on. Here, at the annunciation, Mary the dawn is only the glimmer of a beginning.