By Michelle PaineSeptember 14, 2021Art and Faith, Italy
No Comments

I was working in Orvieto, Italy on September 11. What was it like to experience 9-11 in a foreign country? Processing the 20th anniversary of September 11th this weekend has led me to reflect that living abroad at that moment was in fact formative to my politics, my worldview, and my faith. I’m sharing my journal from the moments after September 11th in Orvieto in the hopes that it may be an encouragement to someone in the midst of divisive times.

The new student group for Gordon-College-in-Orvieto had been in town about two weeks, and I was helping them settle in. Orvieto is a small town of about 10,000 people. Everyone knows about “gli studenti americani” who sojourn at a convent-boarding-school-turned-hospitality-house at San Lodovico. We received an outpouring of prayers and love from the Italians; American Protestant students prayed with a Catholic Bishop, and I wept in front of the tomb of Saint Francis of Assisi. Whereever you were, whatever you experienced. I was praying for you. The world was praying for you.

“Yesterday we watched as the greatest terrorist attach in American history brought down the twin towers of the World Trade Center in New York, a symbol of the US’s economic power and the lives of thousands of people who worked there. Then we watched as the Pentagon – America’s center of government and military intelligence went up in flames. There, too, hundreds died. It was like watching a film… but this was real. Somehow, they succeeded – whoever “they” are. We were in shock. We ALL were, the whole world. In a place like Italy, I could feel that somehow much of the world takes comfort in US stability, though they may sometimes resent it. But to see the most powerful nation in the world struck in its underbelly in this way is a blow to all. If this can happen none of us are truly safe.

As far as we know, none of our families or friends were victims. Praise God. What has been beautiful is the outpouring of prayer and concern we have received here.  People have opened their homes to us because they have satellite and receive CNN. The sisters of the Company of Mary or Lady telephoned to say they are praying. Little Elena, 6 years old, creeps up to me in the courtyard of the convent’s nursery school to say she saw a plane crash into two skyscrapers and is thinking of us. 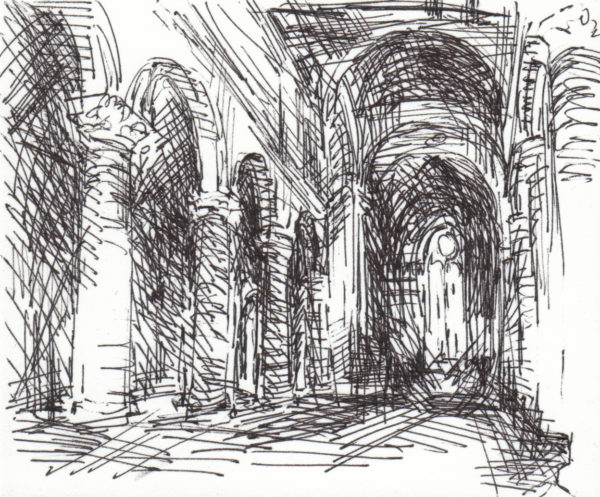 This morning I went to 9:00 Mass in the Duomo while the students were in class. I needed to pray — someone needed to pray — to offer New York and Washington, and indeed the whole country, on the altar, to ask for the presence of Christ. I entered as Don Italo, priest of the cathedral parish, was talking about the events of yesterday, about the horror of it, and about the importance of our prayers and our presence at the Mass today. I suddenly felt so conspicuous.  Everyone (it is a small chapel, usually about 20 at attendance) knew I was there, and that I was American. “Blessed are those who weep, for they will be glad in heaven…” we heard in the gospel today.

“Blessed are those who weep, for they will be glad in heaven…” we heard in the gospel today.

I felt very much NOT alone in the Mass this morning. I felt as if I was receiving the prayers and thoughts from my brothers and sisters in Italy on behalf of my whole country. They were pouring out love and compassion on me and I asked God “Where do I now send what I have received, Lord?” In the caress of Don Italo’s hand on my cheek after he gave me Communion I felt the opening of the heart of the world, as if I held within me all of America and within him were the prayers of the world, and in that gesture was the redemption and compassion which redeems all.

Because I was there, Padre Italo, and Suor Raffaella, and Elena, and other Italians whose names I do not know, were able to demonstrate sympathy that would otherwise have had no outlet. And because there is an “americana” in their lives, this tragedy is perhaps more real, more serious to them than it may otherwise have been. In my being here, rather than home, I opened my heart, too. I opened my heart to receive other’s grief and to grieve on behalf of others. They help me to see the gravity of it all…

translated from an Italian praise song

And this was perhaps – is perhaps – the gift behind this tragedy: the realization that we, all of us, need Jesus, and must ask him to come and return to us what is missing. We must pray for those who carried out this act of horror as well as for the victims, for it is in that prayer that the greatest miracle will happen, where Jesus is most needed.

We must pray for those who carried out this act of horror as well as for the victims – for it is in that prayer that the greatest miracle will happen, where Jesus is most needed.

Prayers for Peace in Assisi 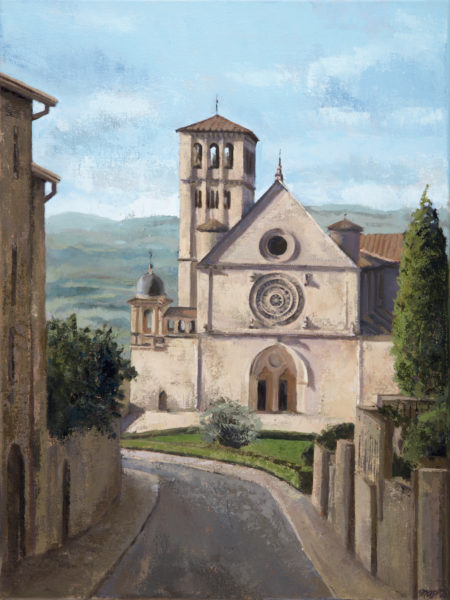 Every time I go to Assisi it becomes more and more a spiritual pilgrimage and less of a field trip. Today was declared a day of mourning and prayer in the United States for the disaster on Tuesday. NATO yesterday decided that this terrorism act was considered an act of war, meaning that it will be responded to in a war-like fashion. It seemed uncannily appropriate to be going to Assisi, to Saint Francis, today on a previously scheduled field trip.

I feel, at the end of this, day, as if we were sent there to as Francis to intercede for peace. I sat before his tomb this afternoon and wept and wept. I wept for the peace that is not, which we wish for but we are not capable of maintaining. I wept for Anne’s friend, the EMT from Boston who went to New York to work for two straight days in the rubble of the World Trade Center. I wept because she should not have had to see that, because she should not have had to find body part after part. I wept because those people should not have had to die. I wept for her, because she gave all she had, until there was nothing left, and she was sitting on the side of the expressway outside New York having a breakdown, desperate to talk to her friend who was asleep across the ocean. I wept because Sister Giovanna, who does not speak English, heard the desperation in the woman’s voice when she called the convent, heard the sadness as Anne apologized for the 2:00am phone call, but then explained that the scene is much uglier than we imagine. I wept because this is death, the Crucifixion, because even a great man like St. Francis had to die. And then God gave me a word: “Francis was great, but he died. How much greater is my love and my peace that I died and ROSE AGAIN. 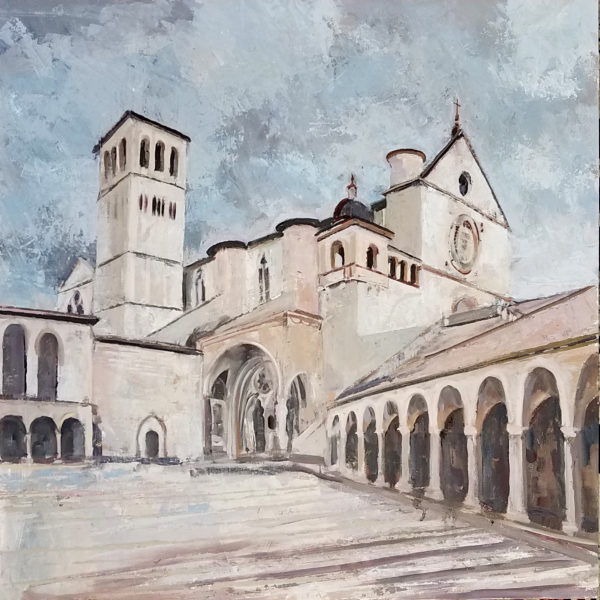 I wept because even in the smallest things God shows his love. As we made the round of sites in Assisi, our group decided to stop and pray in the Capella del Crocefisso in the Church of Santa Chiara, in front of the crucifix of San Damiano which called St. Francis to rebuild his church. The minute we entered and sat down, a man came on the microphone to ask for a moment of silence for the victims of the US. Then we prayed the Lord’s Prayer. We did not know all of Italy stopped at noon for that moment. It was by the grace of God that we had happened to stop then as well. It was a gift to be in prayer with our whole host country.

The bishop of Orvieto-Todi is coming to pay his respects on Tuesday. Don Italo called and said the Duomo parish would be praying and would we like to join them. My father (who speaks Spanish to the sisters) also called, and wept with Sister Giovanna.

“Jesus, give us peace,” I cried out in my heart. St. Francis, may we learn from your peace and bring it to the world. I wept for what may happen, for the suffering yet to come, for the suffering which has past, that I was only able to weep for today.

The Bishop of Orvieto visits the American Students

18 September, 2001. Orvieto.
The bishop of Orvieto-Todi came to see us today – us Americans. At the Thursday prayer meeting of Orvieto priests with the bishop he prayed for America, and Padre Don Enrico reminded him of the Americans studying at San Lodovico. “I would like to go and greet them, ” the Bishop then said. So this tragedy has brought the head of the local Catholic church here to a group of American Protestants, that we may mourn and pray and celebrate together.”

The Importance of Unity Now

These are the raw words from those moments, copied directly from my journal of those days. My experience of welcome and love across language and culture and time after September 11 only accented my already strong instinct for unity. This moment of history, in particular, which I experienced there, makes it hard for me to understand how recent disaster has sparked division rather than unity in the past months. May we continue to pray for peace, and to weep with those who weep.