The Monks of Norcia: Re-Building Tradition after the Earthquakes 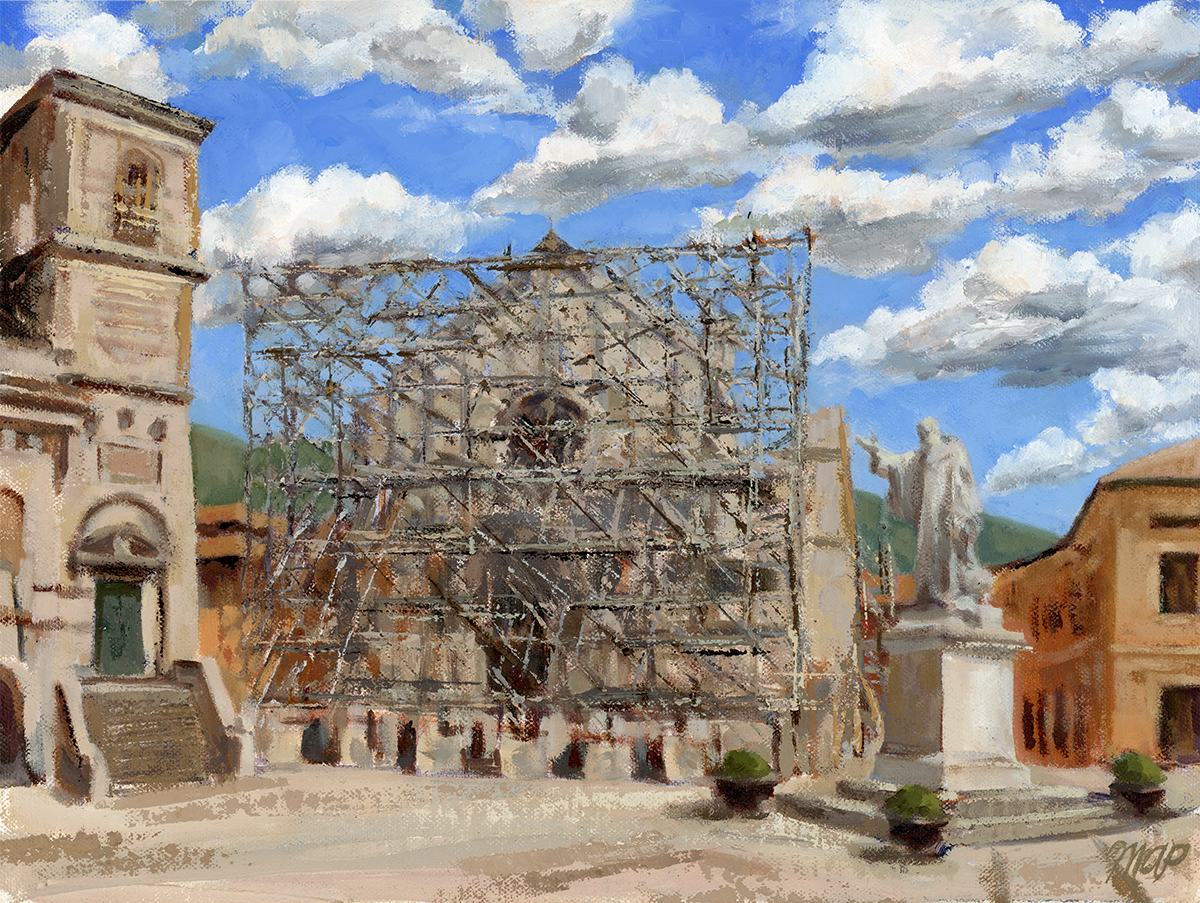 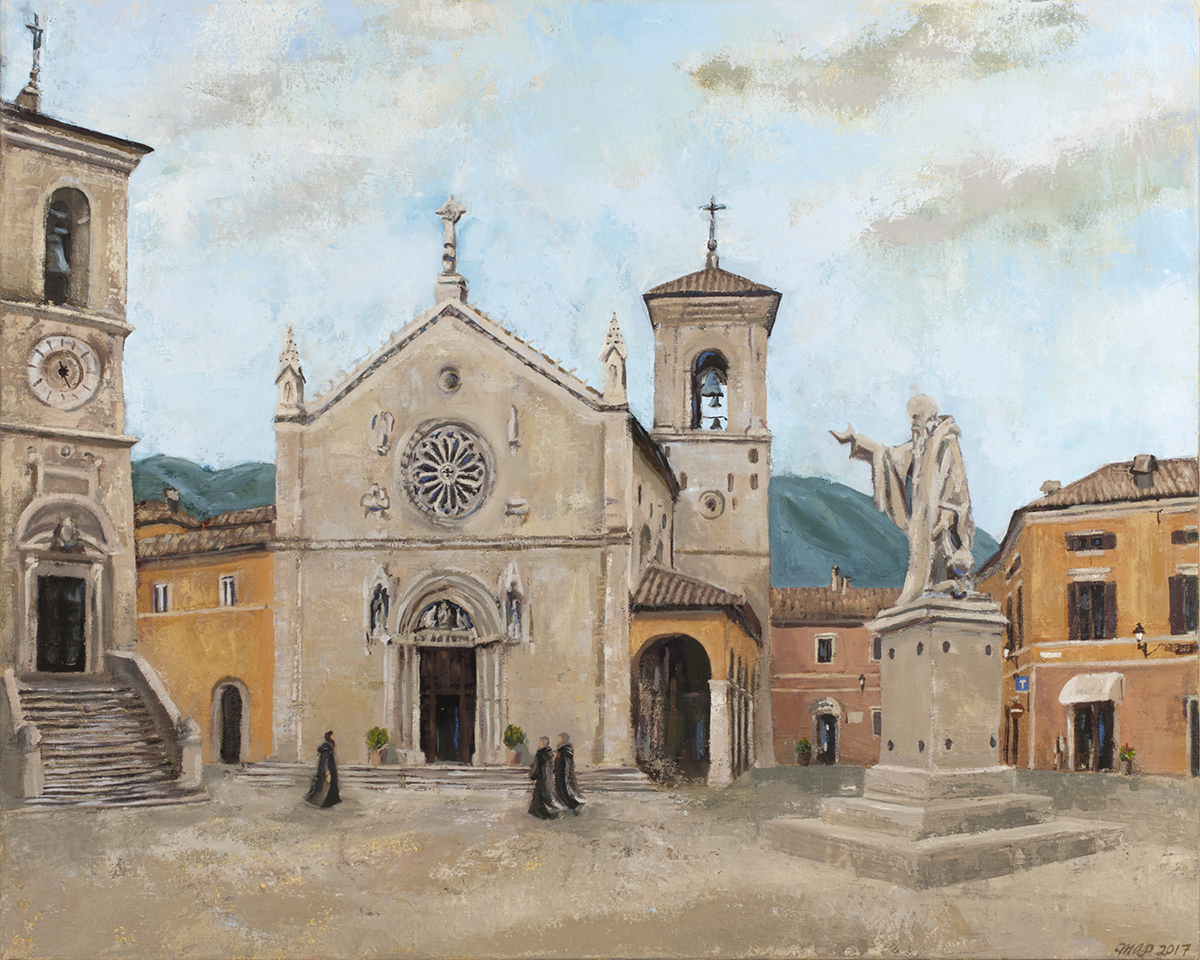 The Monks of Norcia know about rebuilding tradition. In the year 2000, the Vatican approved a new Benedictine community to joyfully reclaim a monastery in Norcia, Italy. The ancient monastery had been devoid of monks since the early 1800s. The Monks of Norcia lovingly began to restore the Basilica of Saint Benedict, built over the fifth-century birthplace of the famous saint.  Catholic Faith Journeys and other groups of pilgrims have brought many groups of pilgrims to Norcia to visit the monks and pray at the birthplace of Saint Benedict.

These new paintings have become my own reflection on the work of rebuilding tradition. One commemorates the Basilica as it looked before the earthquake. The second depicts it in its currently ruined state. One painting was commissioned by a Catholic, the other by a Protestant, and so together they are a witness to the influence of the great Saint Benedict on Christian life.

In a cultural sense, the Benedictines have always know what it means to rebuild. Click To Tweet

Rebuilding Culture: Then and Now

Widely credited as the founder of Western monasticism, Saint Benedict combined spirituality and practicality in his guide for monastic life, “The Rule of Saint Benedict”. The success of his communal experiment preserved classical learning and Christian faith through the chaos and upheaval of medieval Europe. In a cultural sense, the Benedictines have always know what it means to rebuild.

Rebuilding Hearts through Work and Prayer 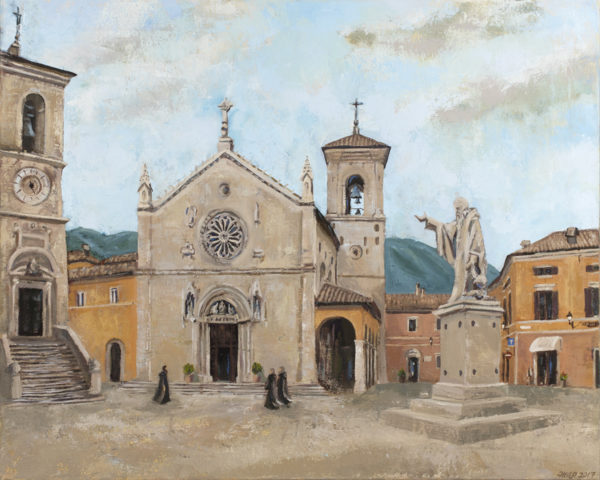 Much of our contemporary Christian understanding of ministry, education, and worship traces its origin to this monastic integration of work and prayer. In this way the Benedictines have inspired countless other religious orders throughout the centuries to innovate within the culture. Thanks to Western monasticism we have hospitals, universities, and other institutions which we consider to be hallmarks of “civilization”.

In the last few decades there has been a new ecumenical appreciation of monasticism. What does it mean to rebuild Christian community in the 21st century? How do we respect and follow tradition while also moving forward in history, embracing the innovation of our natural human creativity?

The renewed interest in monasticism has sparked the imagination of higher education programs, particularly in America. The Monks of Norcia are mostly Americans. This trans-Atlantic dialogue is a large part of my own story. My journey to the Catholic Church and my artist vocation initiated in the Gordon College in Orvieto program, housed in a convent, looking to that monastic heritage for the program’s vision.  The Gordon College in Orvieto program encourages creative students in the arts and humanities to rebuild an appreciation of beauty and the arts within the church.

Just a couple of years ago The Community of St. John began the Saint John’s Institute in Denver, Colorado. In this innovative degree program. the students live in community with each other and the monastic Community of John while they take online courses towards an MBA. This unique model of formation has the final aim of creating financially sustainable ministry opportunities for the New Evangelization. Work and prayer; “Ora et labora”. Saint Benedict continues to speak to those who wish to rebuild contemporary American education, too. 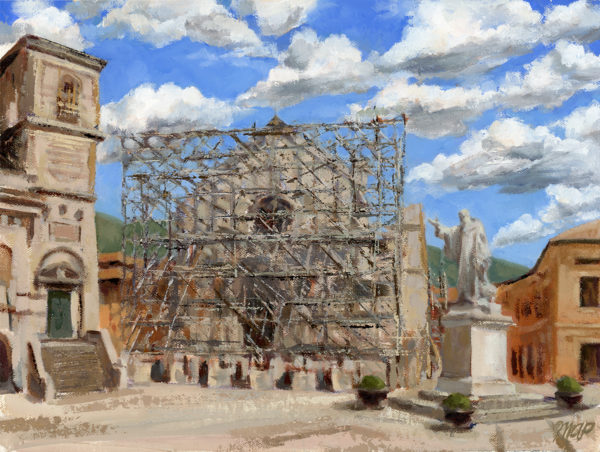 Benedict’s first monastery Montecassino, founded around 529 AD, was far (in those days) from his birthplace of Norcia in Umbria. Eventually the Benedictine monks found their way across the world and back there. Since the 10th century monks have been the caretakers of the Basilica. This medieval church in Norcia was built over the childhood home of the great saint and his sister Saint Scholastica.

In 1810 Napoleon closed many monasteries across Europe, and the monastic community in Norcia fled. From that time there until the year 2000 there had been no monastic presence. In the Jubilee Year 2000 Father Cassian Folsom and a group of American monks re-established a monastery there, thus renewing the Benedictine rhythm of work and prayer in the birthplace of the patron saint of Europe. After a long absence, Western monastic tradition returned to its  birthplace.

Benedict’s Rule encourages monastic communities to sustain themselves financially. Historically many European monasteries produced beer, a safe means of hydration in medieval, plague-ridden Europe. The Monks of Norcia are rebuilding this tradition, too: in 2012 Birra Nursia was launched, selling out the first batch in only a few days.

Monks of Norcia Rebuilding Tradition in Norcia: How You Can Help

August 24, 2016, a massive earthquake hit the town of Amatrice and the mountainous region north of Rome. Although Norcia did not suffer the widespread destruction of Amatrice, significant structural damages occurred to the monastery. After the earthquake the monks lived in tents and then pre-fabricated housing as they, like many others, wait to renovate spaces which are too damaged to safely inhabit. In October 2016, an even larger earthquake hit closer to Norcia and all the churches, including the Basilica of Saint Benedict, crumbled. You can read more about their specific needs and plans at this link.

I donate a portion of net proceeds of prints of the Basilica of Saint Benedict to  to the Monks of Norcia Foundation. Another enjoyable way to support the monks is to purchase one of their award-winning CDs or order Birra Nursia from the monastery brewery. 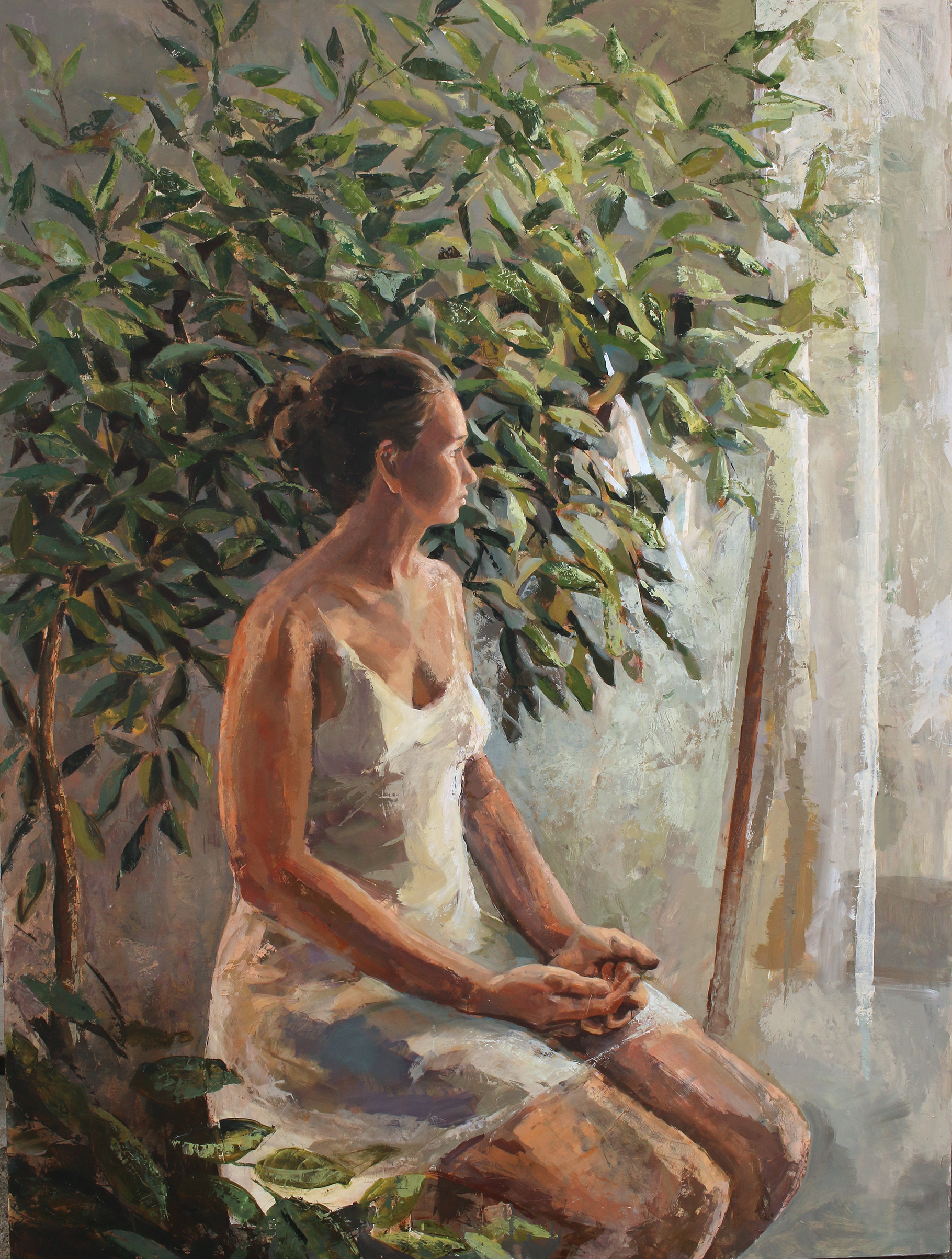 The narrative thread of a tree continues throughout the entire Bible. The tree grow in Genesis, but by the time we get to Isaiah it has been cut down and only a stump remains. However, there is still hope that from the roots a shoot, a small branch will grow again and bear fruit. The image references the words of the prophet Ezekiel, “I the Lord … have dried up the green tree, and have made the dry tree to flourish” (17:24)… And then, towards the end of the Gospel narratives, we come to the tree of the cross.

END_OF_DOCUMENT_TOKEN_TO_BE_REPLACED 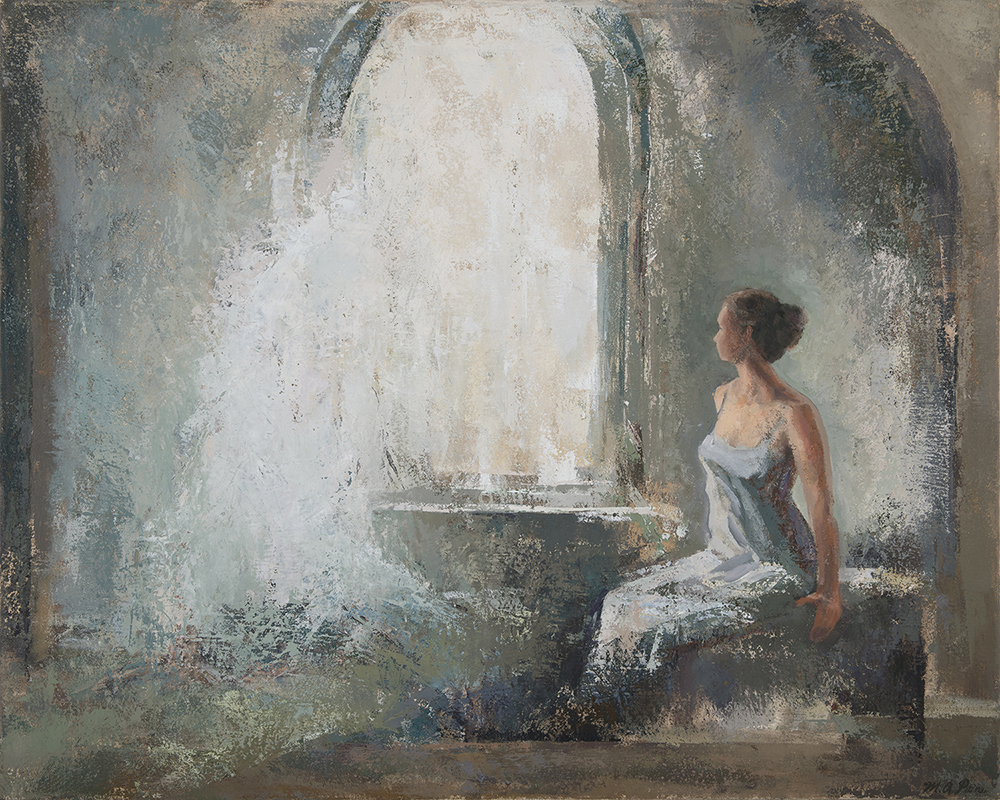 “Mary the Dawn” represents the the Annunciation, the moment of the Incarnation when Mary welcomed Christ into our world. The title references the first line of a medieval hymn “Mary the Dawn, Christ the perfect day”. The “dawn” spoken of in the poem signals that Mary was sign pointing the way to Christ.

END_OF_DOCUMENT_TOKEN_TO_BE_REPLACED 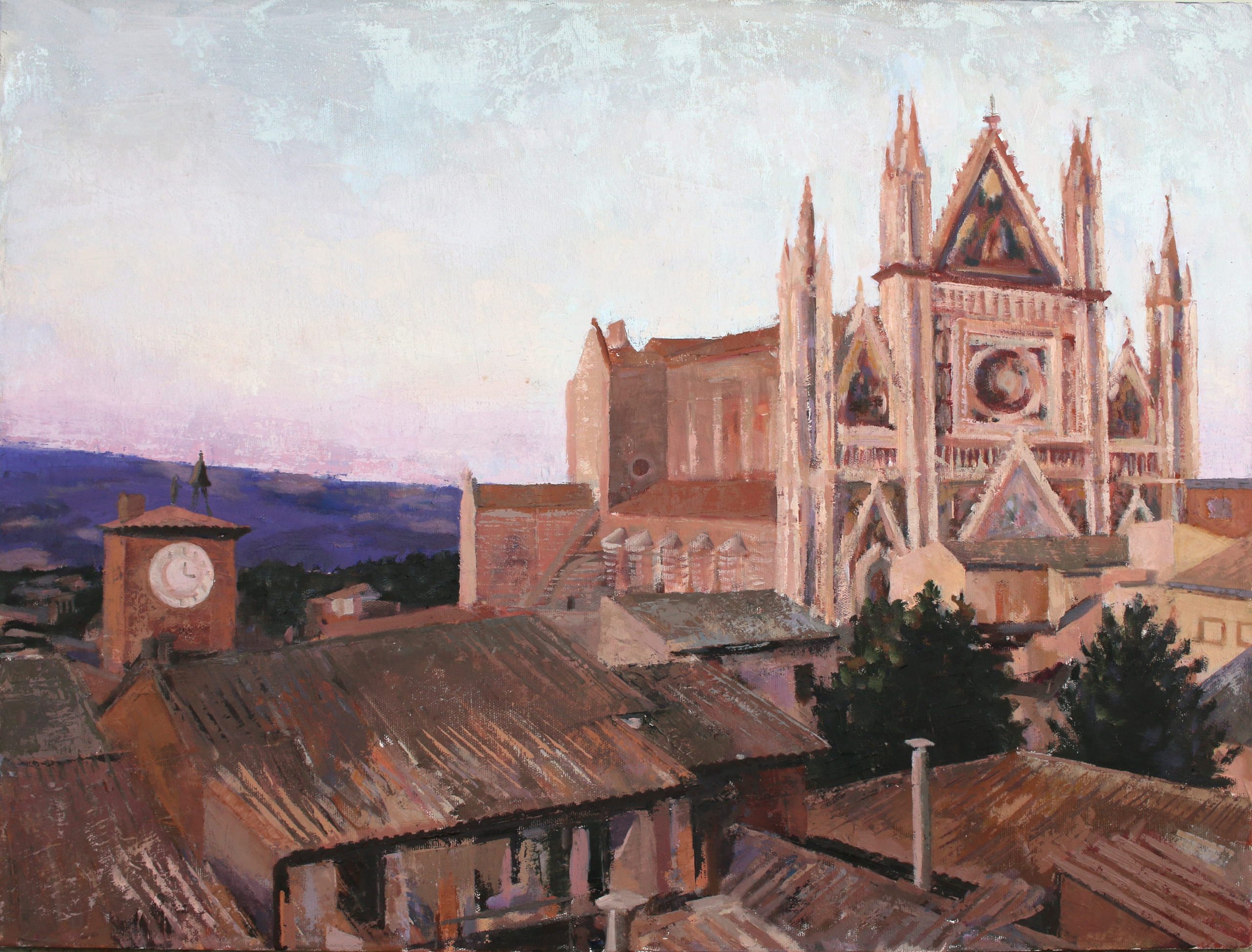 In my early 20s I spent eight semesters in Italy spread out over six years. During that period I embarked on a spiritual journey from an academic encounter with Catholic art to being received into the Catholic Church and receiving Confirmation and First Communion in the Cathedral of Orvieto. On this Feast of Corpus Domini, 2022, I share this short essay from while I was preparing for Confirmation in 2001 and a more recent video in which I share the importance of the Eucharist in my journey to the Catholic Church.

END_OF_DOCUMENT_TOKEN_TO_BE_REPLACED 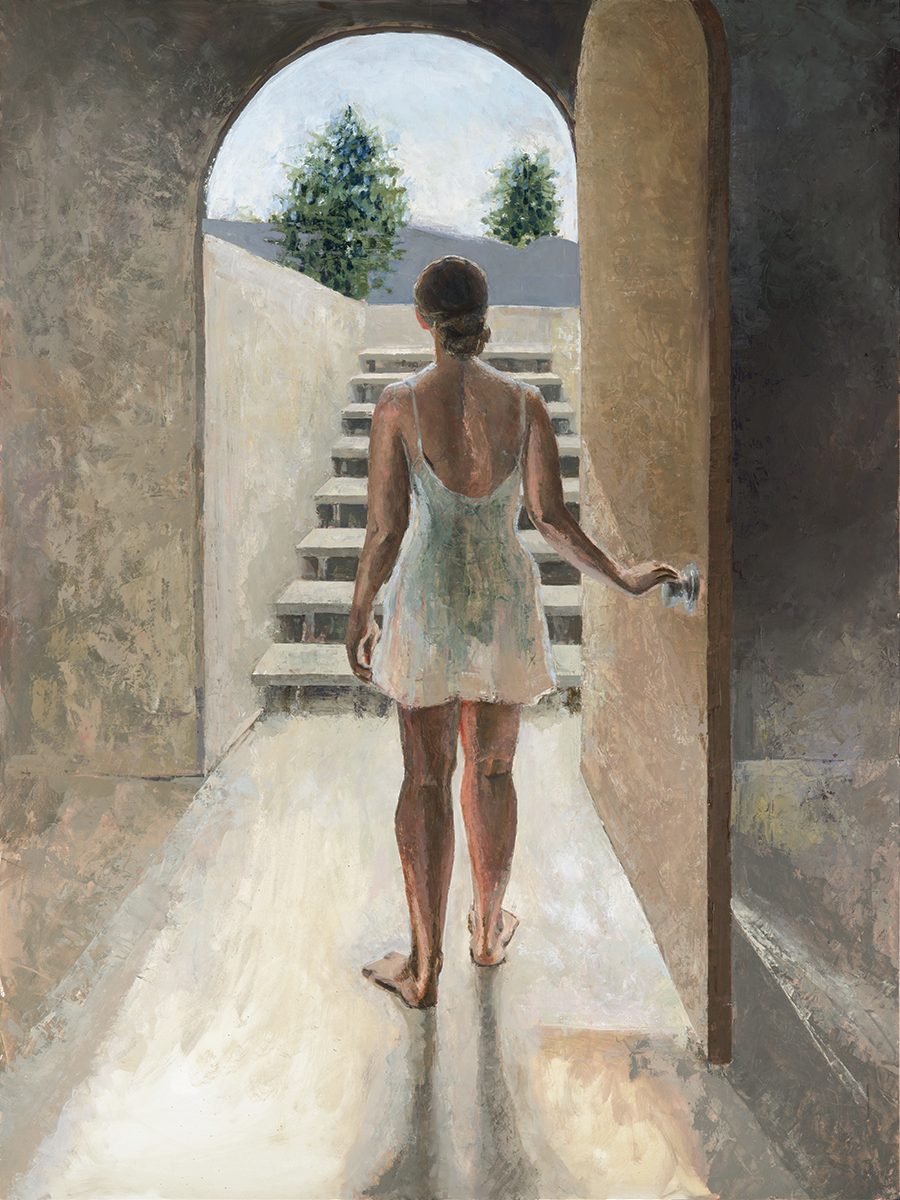 Ascent/Descent is a contemporary interpretation of the Virgin Mary as Jacob’s Ladder. This reading of Genesis 28 views Jacob’s vision of the stairway ascending to heaven as a pre-figuration of the Virgin Birth. Mary was the fulfillment of the LORD’s promise in this passage “I am with you and will watch over you wherever you go, and I will bring you back to this land. I will not leave you until I have done what I have promised you.” Through Jesus’ salvation (brought forth by Mary) we are able to ascend to heaven, and through Mary, Jesus descended to earth. Mary was the vehicle, the connection between heaven and earth which allowed salvation to come.

END_OF_DOCUMENT_TOKEN_TO_BE_REPLACED 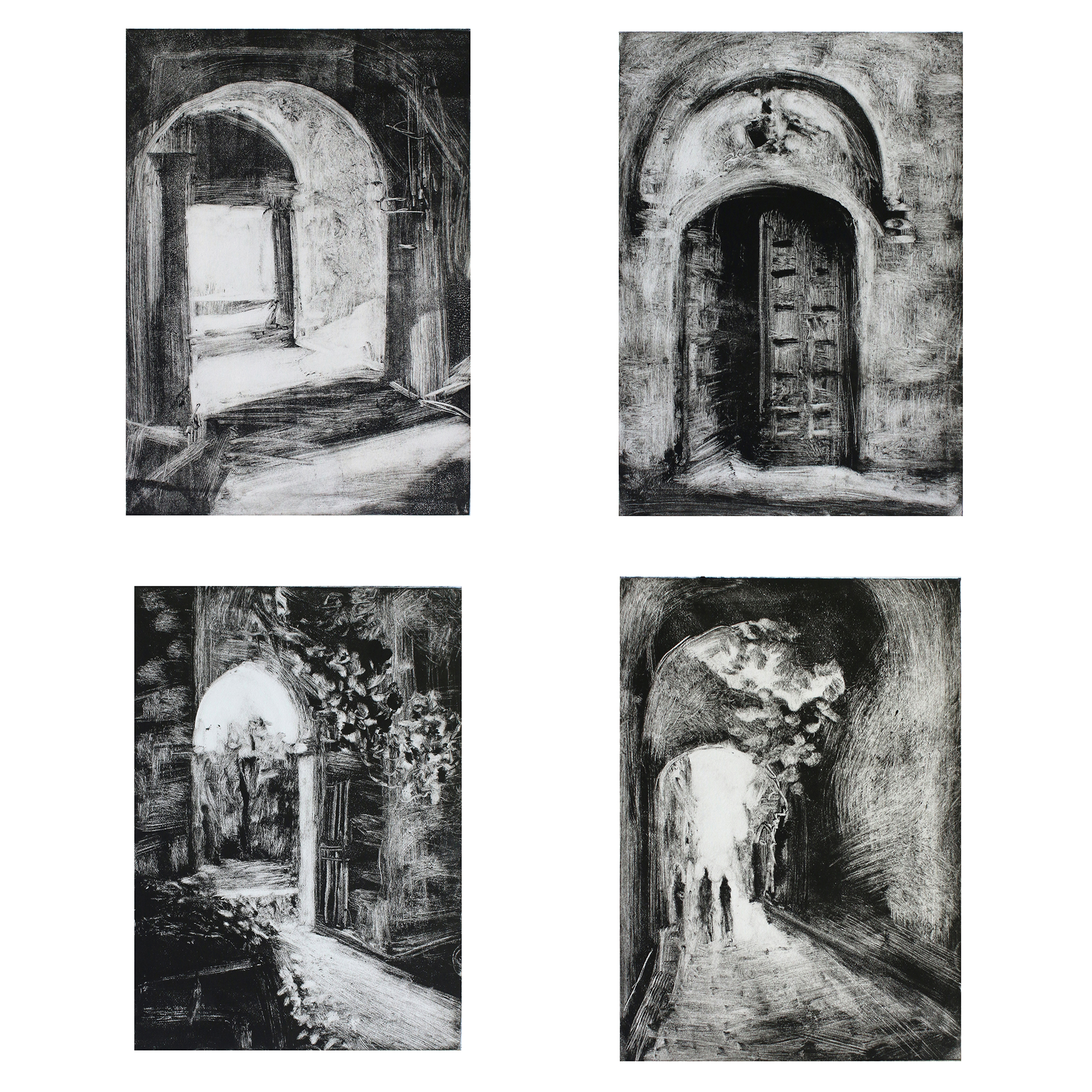 I have often gone several years without creating prints, but I always return to it. Reflecting on how I have arrived at this new collection, I now realize that it has taken many years of research and practice to arrive at this point where I am able to create monotypes in my home studio whenever I desire. I spent a lot of time researching how to create a non-toxic, space-saving monotype process. Spurred on by a desire to retreat from oil painting during my pregnancies, I enlisted the help of artist friends to brainstorm.

END_OF_DOCUMENT_TOKEN_TO_BE_REPLACED

Processing the 20th anniversary of September 11th this weekend has led me to reflect that living abroad at that moment was in fact formative to my politics, my worldview, and my faith. I’m sharing my journal from the moments after September 11th in Orvieto in the hopes that it may be an encouragement to someone in the midst of divisive times.

END_OF_DOCUMENT_TOKEN_TO_BE_REPLACED 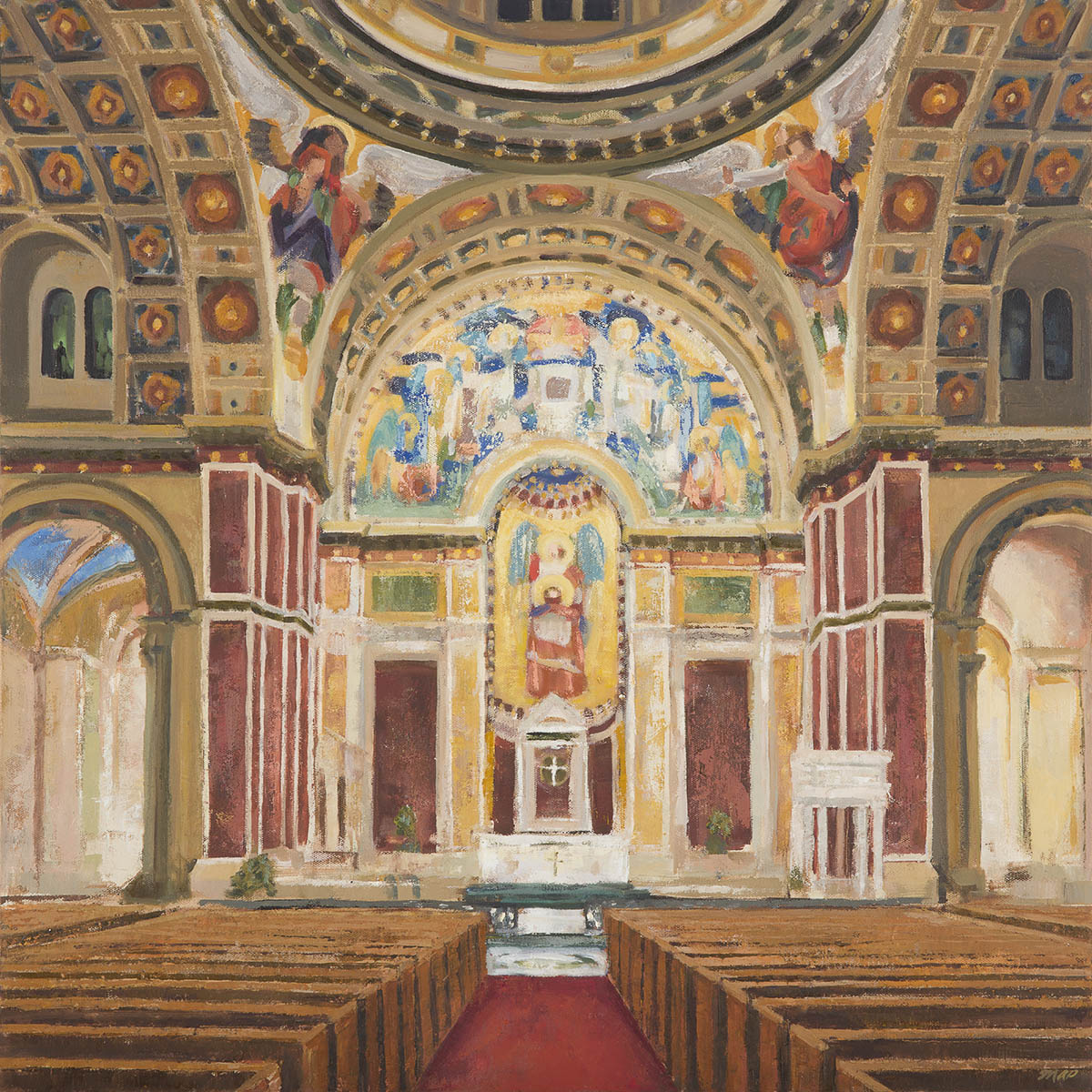 The complex architectural space of St. Matthew’s Cathedral was particularly challenging. For instance, a variety of materials (mosaics, marble, plaster, gilding, wood) cover Historic St. Matthew’s Cathedral in DC. How do I paint each element in a way that contributes to the whole painting? How do I communicate the shimmering array of textures and colors within this beautiful cathedral?

END_OF_DOCUMENT_TOKEN_TO_BE_REPLACED 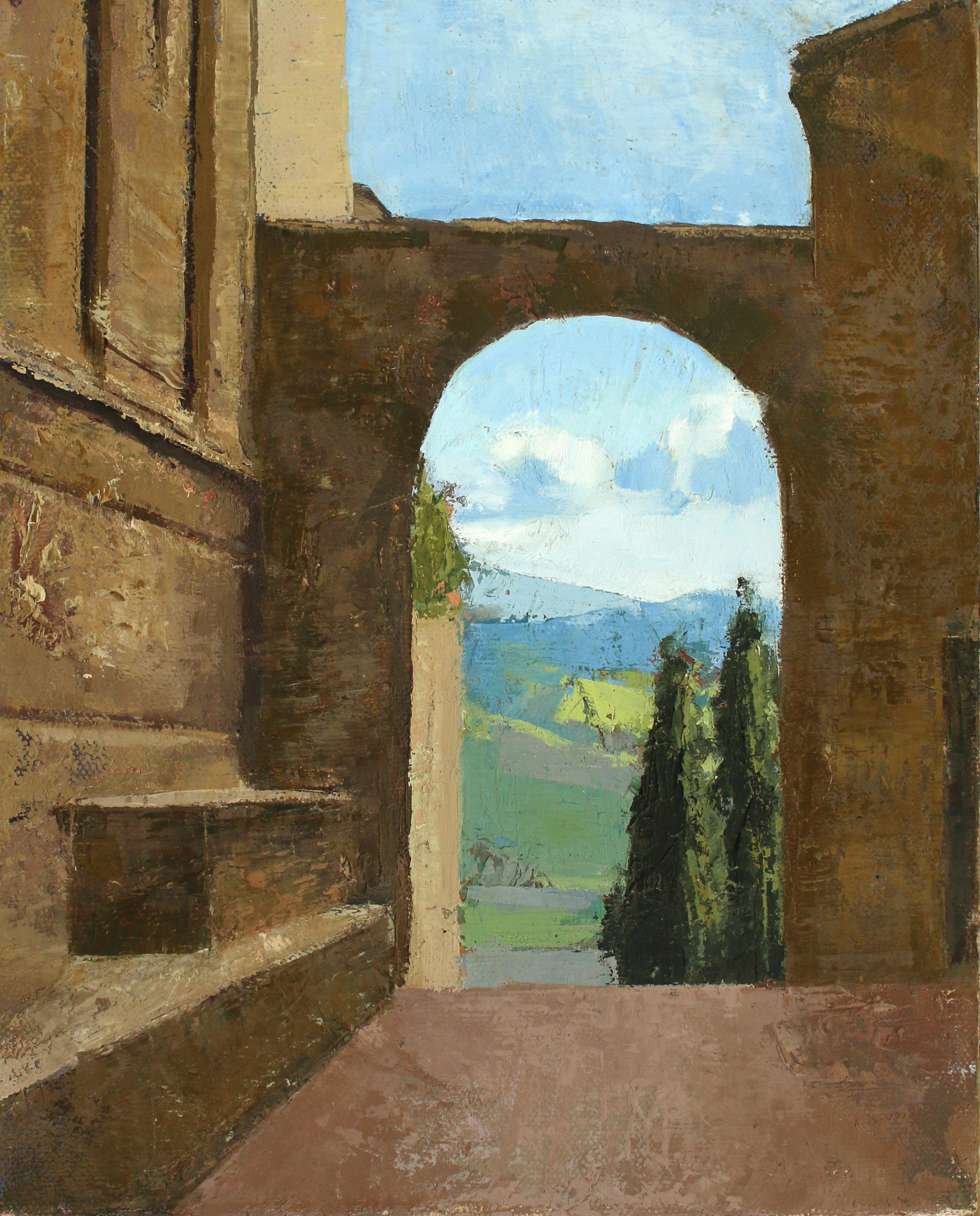 Pienza is a hilltop town, and past this doorway the ground drops steeply into stairs. To me this painting represents how we look at the future in this moment. We see something beautiful, but hazy right now. Because of the pandemic, it is difficult to discern how far off that landscape may actually be and how we might arrive there.

END_OF_DOCUMENT_TOKEN_TO_BE_REPLACED 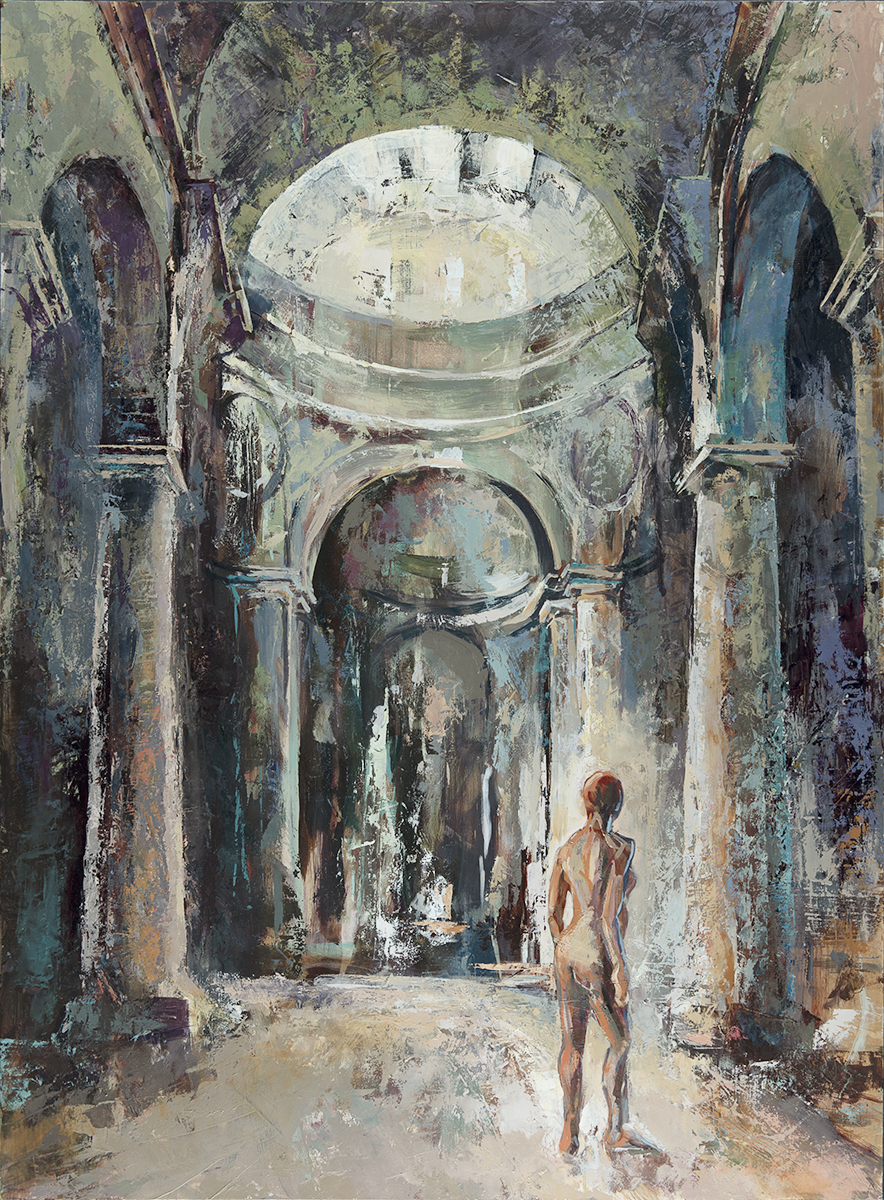 My newest Marian painting “Interrogatio: Inquiry” depicts that moment of questioning “How can this be?” when the angel announced the Christ’s coming to Mary at the Annunciation. Mary’s vulnerability before God is represented here by the nude female figure. The grand space of the architecture represents God’s overpowering presence. The architecture also becomes a metaphor for Mary herself, often referred to in medieval texts as the Temple or dwelling place of the Lord because of her role in the Incarnation.

END_OF_DOCUMENT_TOKEN_TO_BE_REPLACED 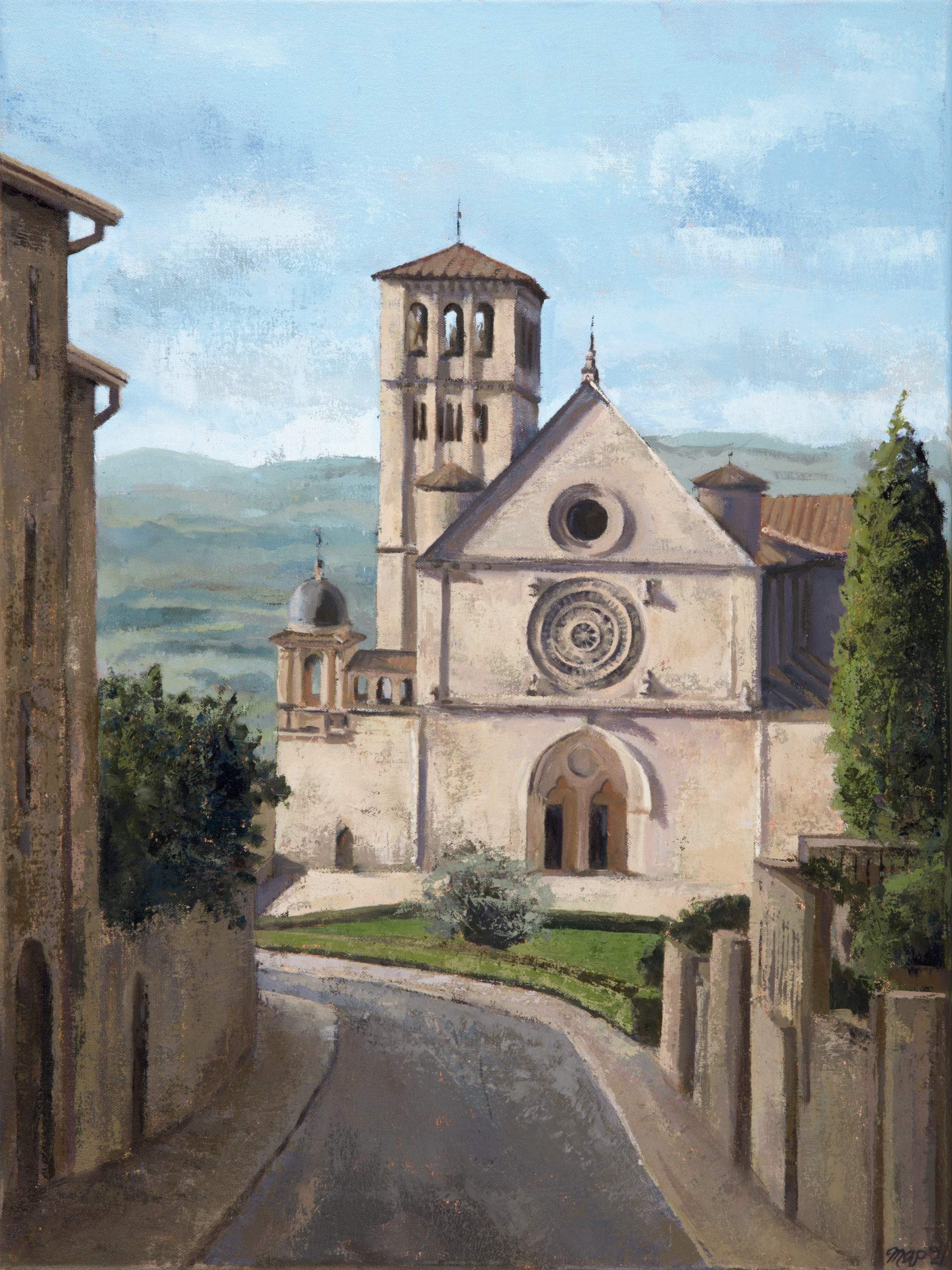 In a similar way, I returned to the shapes and images from my time in Assisi many times. I felt a sense of mystery in the images of rhythms of dark and light. Through drawing and painting I explored the arches of an alleyway multiple times. For me it was not simple documentation of medieval architecture. To me these passageways were like my pilgrimages themselves -a path to something beyond what was visible.