A version of this post first appeared on the blog of Christians in the Visual Arts:

The Faces of Mercy exhibit, is CIVA’s newest traveling exhibit. The show is halfway through its tour of the United States. I curated this exhibit over the course of 2015 and 2016. The inspiration for the title came from Pope Francis’ declaration of a Jubilee Year of Mercy, outlined in the Bull of Indiction titled Misericordiae Vultus (translation: Face of Mercy), to be observed from Advent 2015 through the Feast of Christ the King (November 20) 2016. Pope Francis explains that this Jubilee Year is to be an opportunity to reflect on what mercy looks like “in the flesh.”

But the roots of inspiration for the Faces of Mercy exhibit go further back, to the several years I spent living in Orvieto, Italy in the early 2000s. In 2005, the first annual Festival of Art and Faith was launched in Orvieto. I’ve written previously about how this arts festival was born out of the Catholic holy day Corpus Christi (in commemoration of the Incarnation of Christ), which finds its roots in thirteenth-century Orvieto.

The Art and Faith Festival brings together a diverse array of arts and artists—lectures, exhibits, films, and music—in celebration of the theme. When the Year of Mercy was announced by Pope Francis in 2015, the Orvieto Festival adopted mercy as its theme as well. A conversation I had with Alessandro Lardani, founder and Artistic Director of the festival, sparked a vision for an American art exhibit which would also depict the many “faces of mercy.”

The traveling exhibit in the US, organized by Christians in the Visual Arts, is making its way to church and university galleries from the West Coast to the East Coast, with several stops in between. Anglican, Catholic, Baptist, and non-denominational are all represented in the line-up of venues, reinforcing the message that Mercy knows no institutional boundaries but is a part of our calling as a human beings.

Mercy is a fruit of love (or “charity”), and behaving mercifully toward one another gives testimony to the truth that each individual bears “the image of God.” Jesus tells his followers in Matthew 25 that whatever they did for one of “the least of these brothers and sisters of mine, you did for me.” The gifts listed in Matthew (feeding the hungry, giving drink to the thirsty, welcoming the stranger, clothing the naked, caring for the sick, and visiting the imprisoned) all show compassion for the body of Christ and have traditionally been known as the Corporal Works of Mercy.

Mercy exists with a specific face—Jesus in both the individual who gives and the one who receives.

We are called to see Jesus in every person in need, and when we act in mercy, it is Jesus who receives these gifts, even as it is his love which empowers the giver.The artists included in this exhibit demonstrate a strong emphasis on figuration, befitting the idea that mercy exists with a specific face—Jesus in both the individual who gives and the one who receives.

The work in the exhibit explores themes of brokenness and redemption; brokenness necessitates mercy, which is expressed in the form as well as the content of the selected works. Through contemporary and scriptural narratives of mercy—or by collaborative dialogue in the process of making—these works are reminders that “it is not the spiritual which is first but the physical, and then the spiritual” (I Cor. 15:46).

Can art function as a work of mercy? Can making be an act of mercy in itself?

Historically there are also Spiritual Works of Mercy, which manifest in compassion for the soul. These include instructing the ignorant, counseling the doubtful, admonishing sinners, bearing wrongs patiently, forgiving offenses, consoling the afflicted, and praying for the living and the dead. This leads to a question: Can art function as a work of mercy? Can making be an act of mercy in itself? 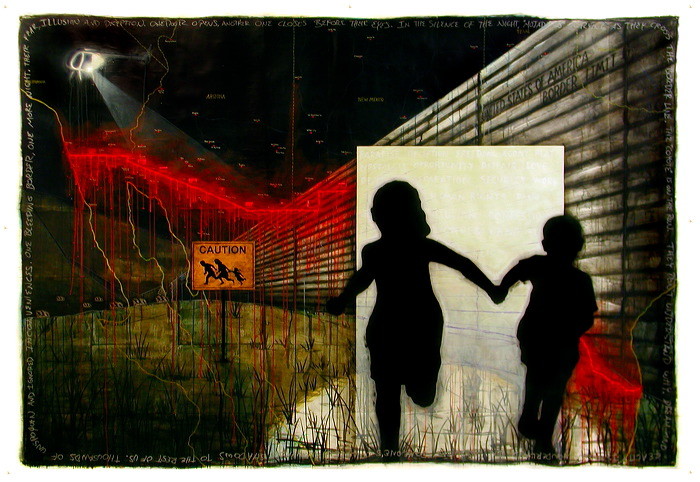 Visual art can, and often does, provide a didactic function, i.e., instructing the ignorant. In that art points to transcendence and provides hope, art can also aid in consoling the afflicted or counseling the doubtful. When a piece of art—such as Sergio Gomez’s Bleeding Borders, in which he invites his viewers to experience the world through the eyes of migrants crossing the southern U.S. border—humanizes the “other,” it paves the way for the viewer to be changed and to extend mercy.

In addition to Sergio Gomez, Edward Knippers, Jason Leith, Michelle Arnold Paine, Bryn Gillette, Melissa Weinman, Jean Wetta and Bruce Herman all have works included in the exhibit, and you can read more about their work either at CIVA or interviews in the May edition of the new publication The Art of Faith.

Just as acts of mercy bring relief to those who suffer, so too works of art can bring relief to souls who suffer. Mercy can provide hope—hope for change, hope for repaired relationships, and hope for a restoration of culture. Every small act of mercy becomes a building block in the construction of Christ’s kingdom.

Creating is an Act of Love

Creating is an act of love in which the artist exercises patience, discipline, and the pursuit of truth in participation with God’s creativity and love. As far as art has the capacity to move hearts, it serves as an act of mercy. Lord willing, this exhibit will inspire mercy in its viewers as it travels across the United States.

Tips to Keep the Creativity through Change and Mommy-hood