Collaborative drawing master studies are a way to slow down and take in the immense complexity of the the compositions of frescoes by Masaccio, Piero della Francesca, Luca Signorelli (to name only a few. These works are so complicated they can be overwhelming for a viewer — and even more overwhelming for a student of drawing. I have found that working on a team minimizes the overwhelm. Looking for simple moments of overlap and intersection can allow an entry point into serious investigation of these masterpieces to create master study drawings which have merit in their own right. 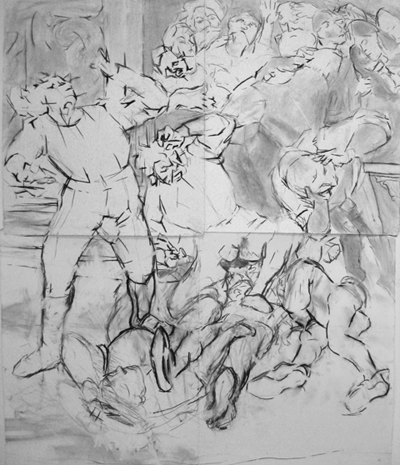 My experiments with these sort of projects came out of my experience participating in a Drawing Marathon with Graham Nickson through the New York Studio School of Painting, Drawing, and Sculpture. The Marathon was not in New York, but in Orvieto, Italy where I was working at the time.

In addition to travelling to visit various artistic sites and drawing from the model, we spent the second week creating a to-scale transcription of one of the Luca Signorelli frescoes from just a few blocks away in Orvieto Duomo (Cathedral). 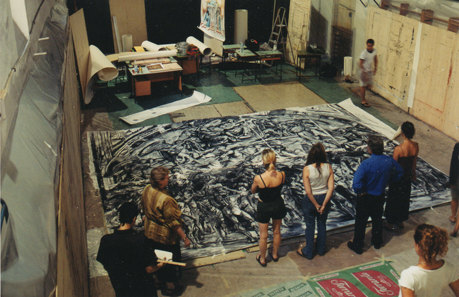 We drew for nine hours a day for two weeks, and it was a pivotal experience in how I approach drawing.The process of working on a drawing with others I found both humbling and challenging. I found it forced me to see relationships on the page that I would never have seen on my own.

I assigned a similar assignment in a Drawing II class last year. Students worked in pairs to seek out the complex interaction of forms using minimalist mark-making of x’s and y’s, recording only where forms overlapped and intersected each other.  to understand how forms intersect and overlap in space.

The 16th Century Renaissance frescoes are filled with figures depicting the end times, the Resurrection of the Flesh, the Damned entering Hell, and the Crowning of the Elect in heaven. Dozens of figures, demons, and angels are stacked into  the space of the Signorelli frescoes.

I am looking forward to  continuing this sort of collaborative investigation in a Weekend Workshop at the New Art Center in Newton in January in which we will explore drawing masterworks collaboratively in a similar way.

Teaching and Art-Making: Classical Education Paints A Door to the Past