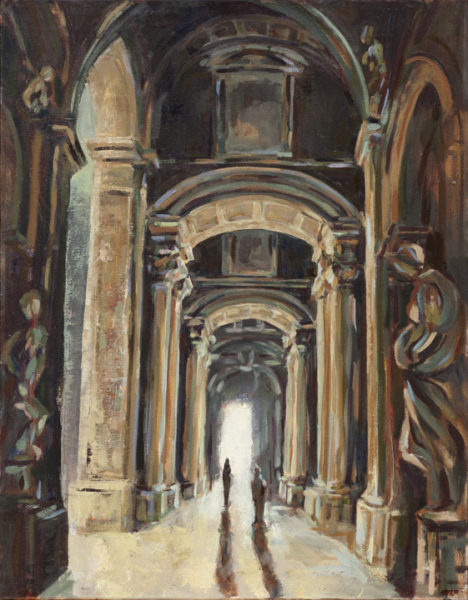 My Journey Home: How Art, Italy, and a Relic Led me to the Catholic Church

I’m going to be on TV! Monday, July 18, 2016 at 8pm EST you will be able to watch my guest appearance on The Journey Home, Marcus Grodi’s weekly program on EWTN (Eternal Word Television Network). I will be sharing the story of my journey home to the Catholic Church on the show. The episode is available on YouTube. JonMarc Grodi will be guest-hosting this episode and we will be talking about how my time living in Italy led me eventually entering into full Communion with the Catholic Church. It was a lot of fun to spend time conversing with JonMarc, who I see regularly but never get to talk to. It was also great to make the trip down to the main office of the Coming Home Network International in Zanesville, OH.

“I tell you these things because this is how we return thanks to God, that after being corrected, and having come to an awareness of God, that we glorify and bear witness to his wonderful works in the presence of every nation under heaven.”

Here is just a quick preview! My junior year of college I went to study in Italy. I spent one semester in Florence, followed by one semester in Orvieto,  Umbria, which houses the relic of a medieval Eucharistic miracle. At first, this seemed to me to be yet another medieval legend which had no historical basis. (Read more about the Miracle of Bolsena in this post about Orvieto and Corpus Christi)

While studying in Orvieto I became friends with many devoted Catholics with a special devotion to the Virgin Mary. These included the sisters who hosted our study abroad program in their religious hospitality house, members of a Charismatic Catholic community, and members of my local parish choir (there were no Protestant churches for 50 miles or so, so we went to Catholic Mass on Sundays).

In my studies of Art History and my travels in Italy, I was first struck by the great number of Annunciation altarpieces I saw in churches and museums. Mary appeared everywhere – on street corners and quite prominently in my art historical studies as well, in particular the image of the Annunciation, the story from Luke 2. This confused me at first – only Mary above the altar? Where was Jesus? But the Annunciation is the moment of the Incarnation, the moment in which God comes to earth. In the same way God comes to earth in the Eucharist which occurs daily on the altar before the paintings, and so this episode is not only appropriate for that location but a living metaphor for what occurs there, when he comes to earth in the sacrament of Communion.

Christ comes to earth in the flesh every day in the Eucharist, and Mary was the first tabernacle.

Over the course of a couple of years I realized that this emphasis on Mary and the Incarnation dovetailed with the focus on Incarnation in the Eucharist.  Orvieto Cathedral, and the Catholic communities I found there, housed a truth I could no longer deny: Christ comes to earth in the flesh every day in the Eucharist, and Mary was the first tabernacle. John 6 [“unless you eat my flesh and drink my blood”] was not speaking of a “symbol” to be explained away or ignored – it was the truth. When I realized that, I recognized I had no other option but to join the Catholic Church. I wanted to be a part of the beautiful – and diverse – communities I saw enfleshed in Orvieto. I came home, receiving the sacraments of Confirmation and First Communion in the Cathedral of Orvieto, Italy in 2001.

Are you interested in hearing more about my art, my story, and about how art can bring you deeper?

Orvieto and the Feast of Corpus Domini: Incarnation and the Arts